A short break in-between posts of adventures of Nori and I, when I arrived home I was met with an almost-embarrassing amount of mail. But, among those was dolly mail, and one of the girls who had arrived was the much-anticipated Pullip Alice in Steampunk World.

Coming in an elaborate brown box covered in gears, the newest Alice in the Pullip family was staring out at me. 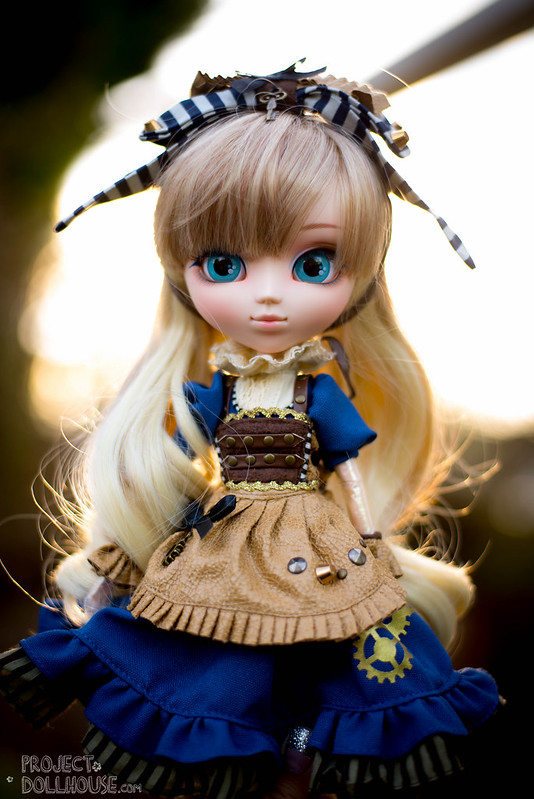 Steampunk Alice is part of a new series of dolls released by Groove in 2015. There is also a Mad-Hatter version slated for release in August, as well as an accompanying series of characters. Alice is the first in the series, and makes quite an entrance. 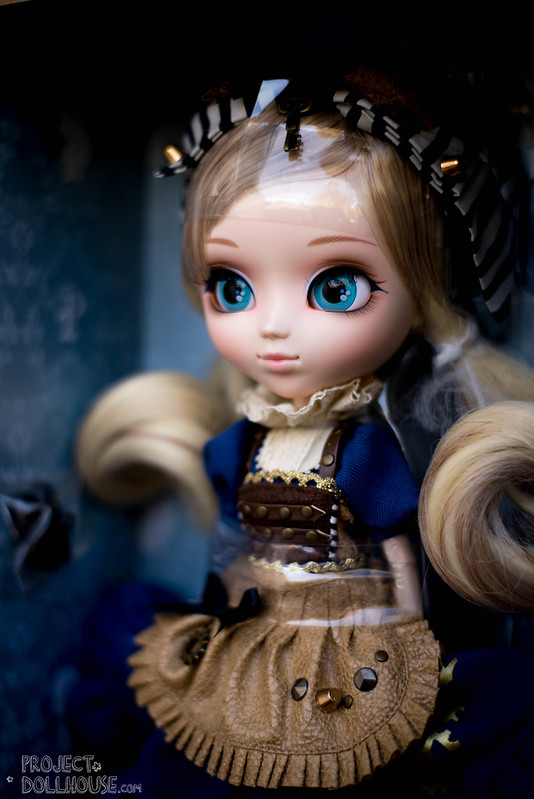 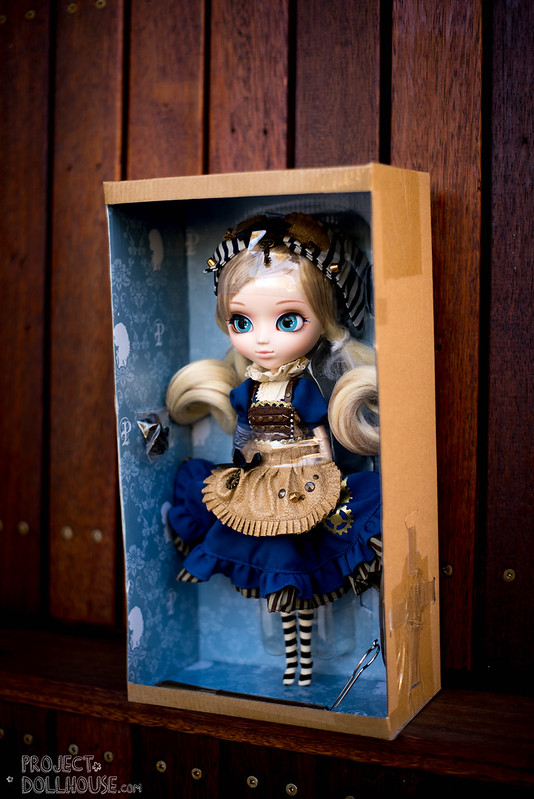 Alice comes with quite an elaborate outfit with cute little Steampunk details. More so than what we saw with girls like Eos or Aurora, she’s an interesting addition to the Pullip family. 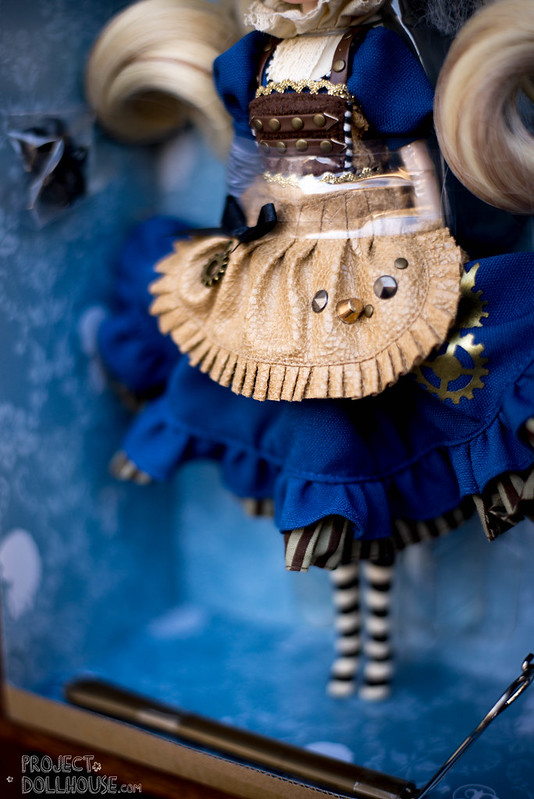 Her leather apron features tiny studded details, and intricate little pleats along the edge. The top of the apron has a darker leather with belted straps and, blue and white piping, and golden lace trimmings. The apron sits on a bright sapphire blue dress made of a thick fabric with golden gears printed on it, with the hem pleated again. The blue dress has puffy sleeves, and hides a cute ruffled blouse with a high clown collar. This in turn sits on another layer of white and brown striped cotton which adds volume to her skirt.

Her arms are completely covered in plastic, and like her legs, she has striped arm warmers and little wristlets that flair out. Her legs are covered in these gorgeous leggings.

Her shoes slightly different to the other Alice dolls. Similar to wedged Mary-Janes, her shoes are heeled and smaller than Classical Alice’s and Romantic, and miss the elaborateness of Alice du Jardin.

She has this headband which I could only describe as elaborate. It’s multi-layered and extremely cute, using cotton, studs and leather. Her headband is very different to other Alice dolls, in that it is tied behind (or in front) of her ears (under her chin) with extremely frustrating leather straps. As normal, it’s not that easy to keep on!

Let’s talk a bit about her faceup. It’s quite different to many other of my Pullip dolls! She has a thick slick of black liner, done in the doe-eyed puppy dog style with the corners pointing downwards. She has lady-like caramel brows, but what makes her a bit different is how they’ve painted her lids and lower lashes. They’ve used a mixture of sepia brown, blue and coral – this girl has spunky makeup! Her eyeshadow is a warm blushy brown, smokey eye. Her lips and cheeks are quite subtle, which I think matches her stunning eye makeup. Her eyelids remain nude in colour.

Her eyechips are a bit different, bizarrely flat, they make her look kind of spaced out. I will probably re-chip her in the future. 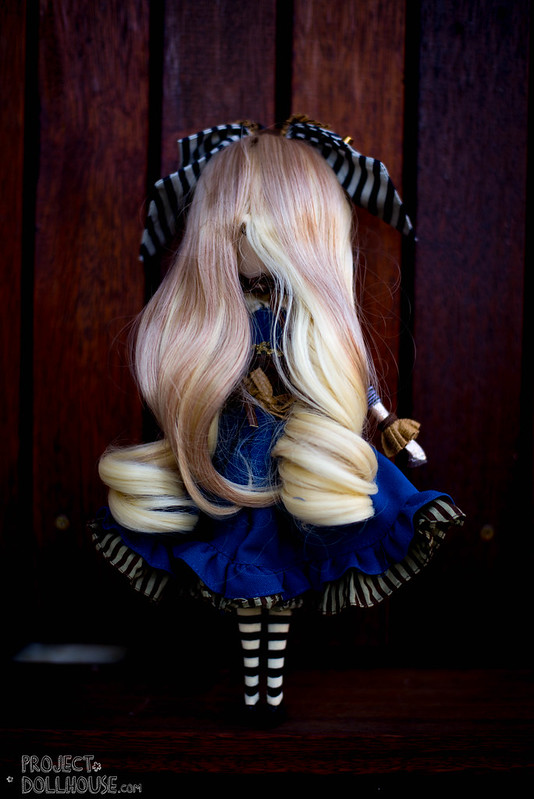 She has some wicked hair though. The colour reminds me a bit of Pullip Prupate – she has this honey-blond brown hair with wild platinum streaks. The colour scheme is very soft with brown undertones. Her hair is soft, and comes in two giant curls which wanted to mess up as soon as she left the box. I wouldn’t say it was the most manageable!

I think that Steampunk Alice is one of the prettier releases this year (and we’re already in July!), and the first that is not a anime or collaboration doll (the collaboration dolls being Laura and Alura). It’s nice to see Ars Gratia Artis releasing some of their own girls because they do put so much attention to detail in it – even if she is another Alice doll. 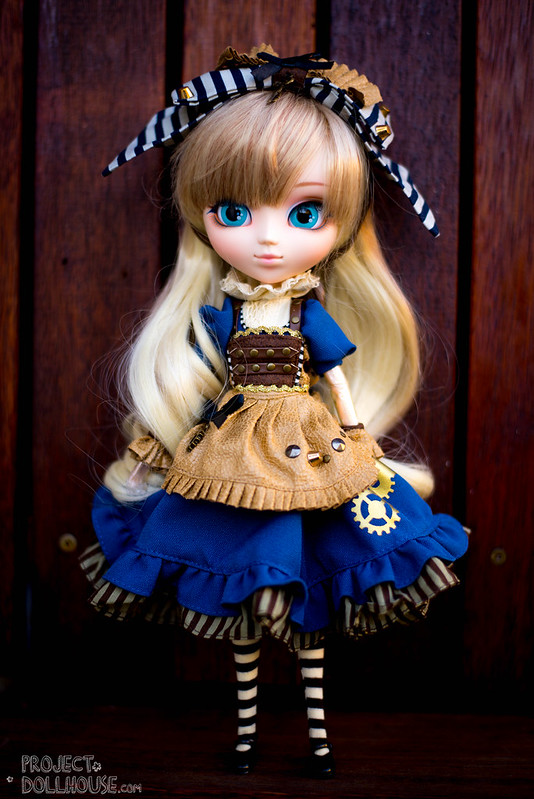 Would I add her to my dolly collection? Most definitely for mine. But others might have an overload of Alice, but even then she’s a pretty one.

She’s currently available for pre-order at Pullipstyle, and amiami.com – depending on your location, shipping might be cheaper.

PS. Have you seen the images for Mad Hatter? She looks fierce.