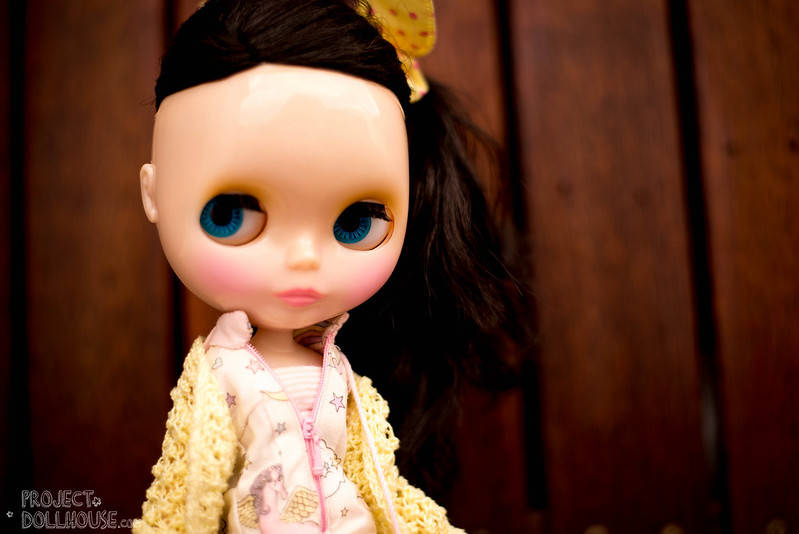 Just before I left the country I put in an order for one of my favourite translucent girls of all time (besides Miss Sally Rice and Margo Unique Girl) – the wonderfully funky, and spunky, Nostalgic Pop (also known affectionately as NosPop).

NosPop was originally released in 2010 (my goodness, 5 years ago) and even then they described her as eccentric. 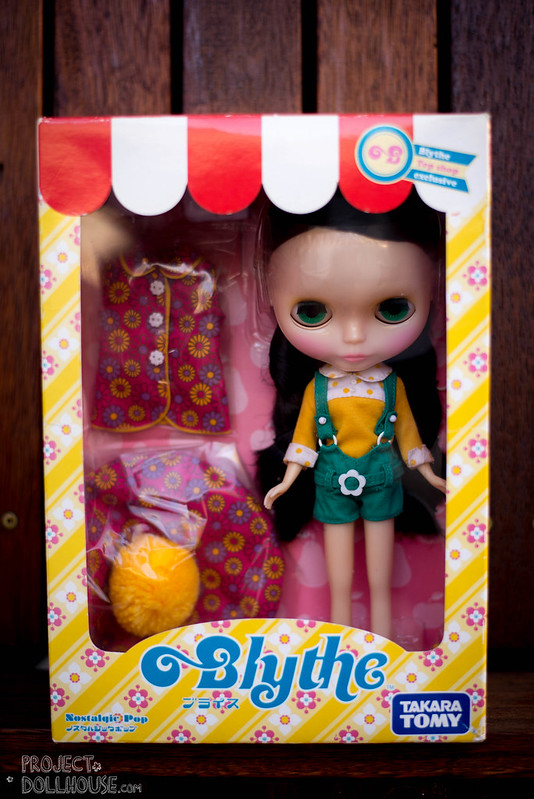 Here she is never removed from her box.

Now, I buy a lot of Blythes and other dolls second hand, and sometimes I’m lucky to score them new in box like NosPop. I bought NosPop from one of the nicest Blythe people, located in Singapore. She’s one of 3 girls that have come to me from Singapore, and like Le Jardin Maman, she was a little mouldy – through no fault of the seller. Her clothes had yellowed a bit, her arms, body, and legs had little mouldy marks all over. It is a risk of buying a NRFB girl from a humid country. 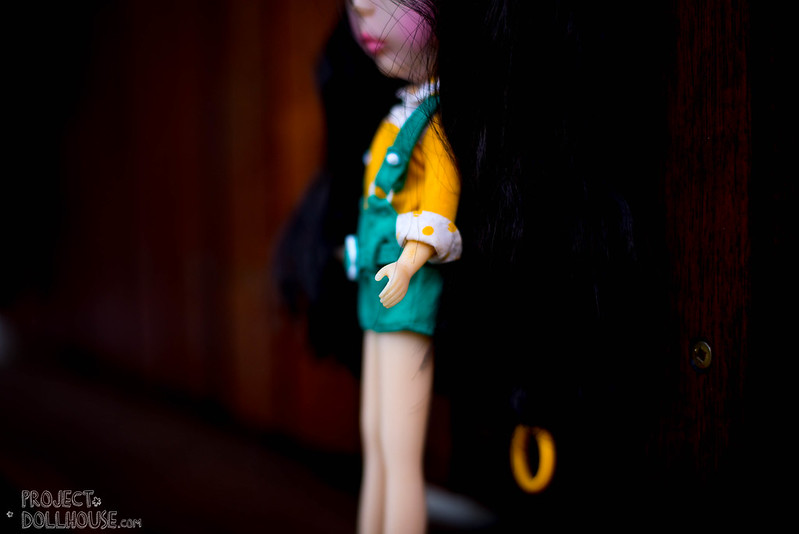 You can see the yellowing on her arm all the way up under her sleeves.

However, I’ve dealt with this problem before so I wasn’t overly concerned about it! I’ll show you the little treatment she went through later in the post. 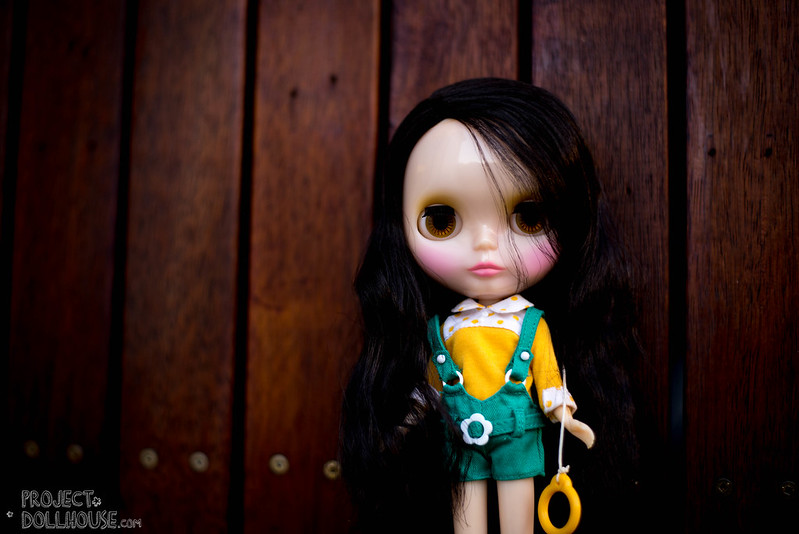 NosPop herself is a gorgeous stock doll. Translucent in skin (it’s like she spent her previous life as a spokesperson for SK-II or something) she has full lips like Curly Blue Babe and Bianca Pearl. She’s toned down in her makeup, her lips a pale peachy pink, and her skin nicely blushed. She also has some gorgeous eyechips, the lovely browns you can see above. Her pull-ring is a marigold yellow, which I LOVE. She has wonderfully thick, fringeless, side-parted and manageable straight, black-brown hair. It’s one of the best quality Blythe hair’s that I’ve had out of box. 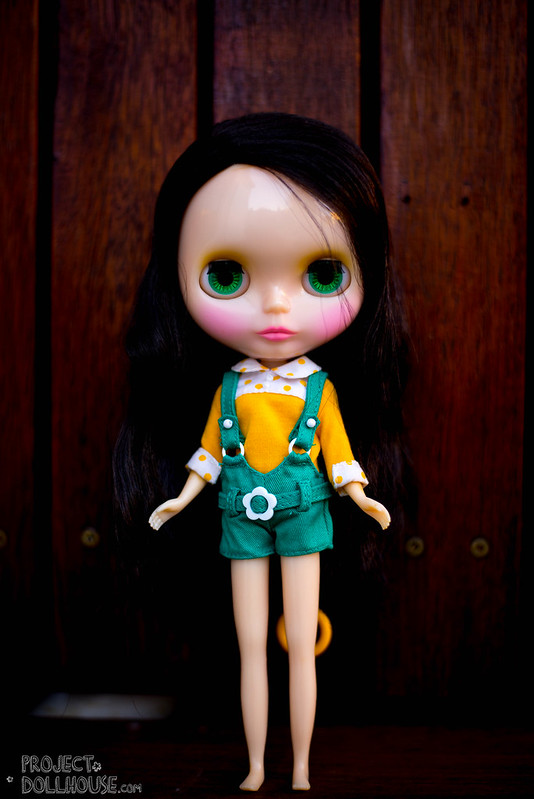 She has these beautiful jade-green eyechips that match her funky overalls. She’s a pretty well matched release! I didn’t remove her 70’s raincoat or beret from the box yet, or her killer red shoes, as I had to give the girl a bit of TLC first. 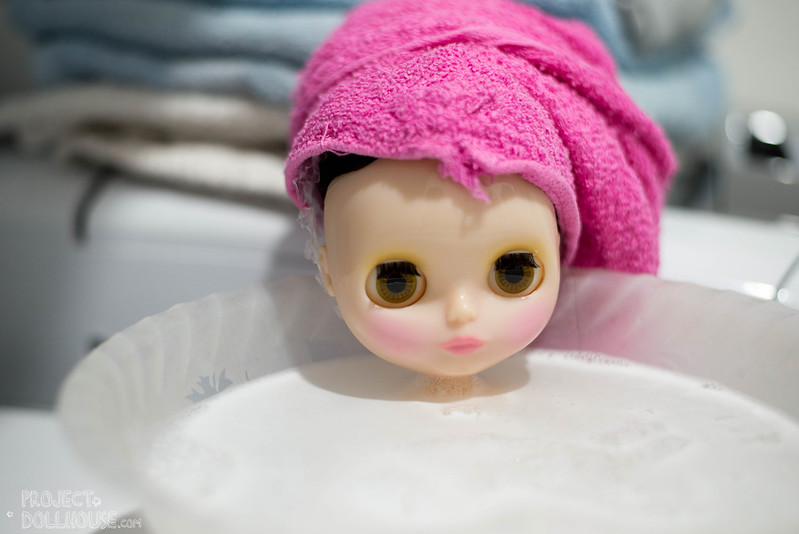 Now, I wouldn’t recommend something like this unless it was quite bad – this is because the Blythe body is hollow and it’s a bit of a pain to tip all the water out of her after, but the yellowing and mould travelled all the way up her arms, and I was worried it had gotten inside too – so full body bath it was!

She’s here sitting in some warm water, some oxy-action sensitive detergent, with some whitening agent. She sat in there for about 2 hours before I gently scrubbed her down with some antiseptic and a toothbrush. Afterwards – no mould, and as good as new! 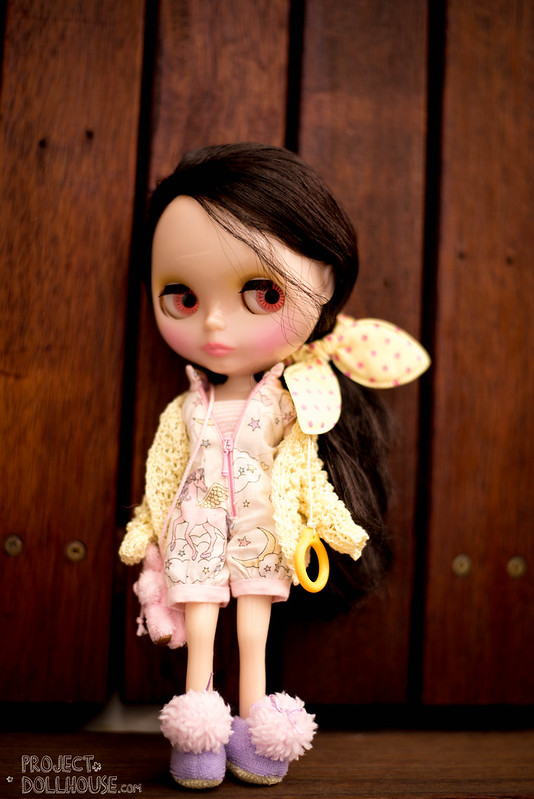 NosPop is one of the few girls that I am okay with having those weird pink chips. She can rock them. Here, she is wearing this gorgeous, gorgeous outfit by Nenelle et Lalluli that comes with this cute teddy handbag, a hand-knitted cardigan, crop top, and unicorn jumpsuit. It also came with matching stockings, but at the moment NosPop had just gotten cleaned so she borrowed Byul Secomi’s slippers. 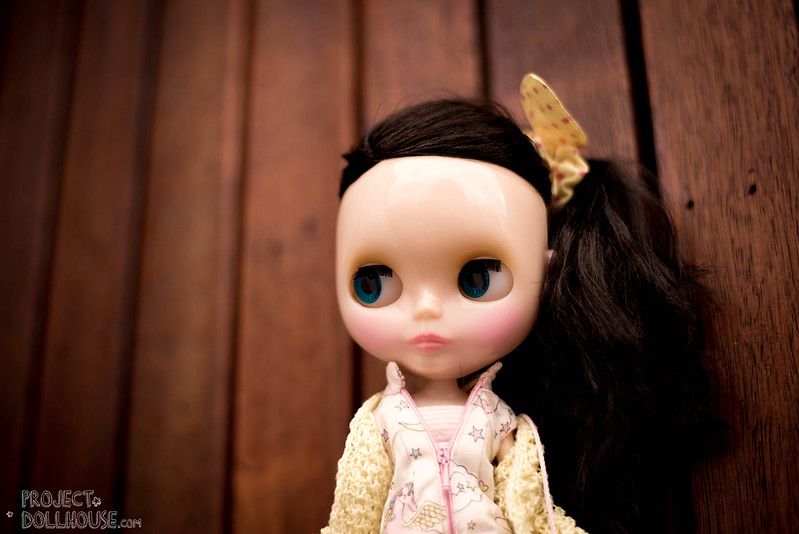 After going from Pullip to Blythe, one of the things I can’t get used to is their shiny, shiny faces. But I’m okay with the translucents, and they’re arguably the shiniest. I’ve seen spray-matted translucents that look amaze-ballz, but I’ve not attempted it yet. 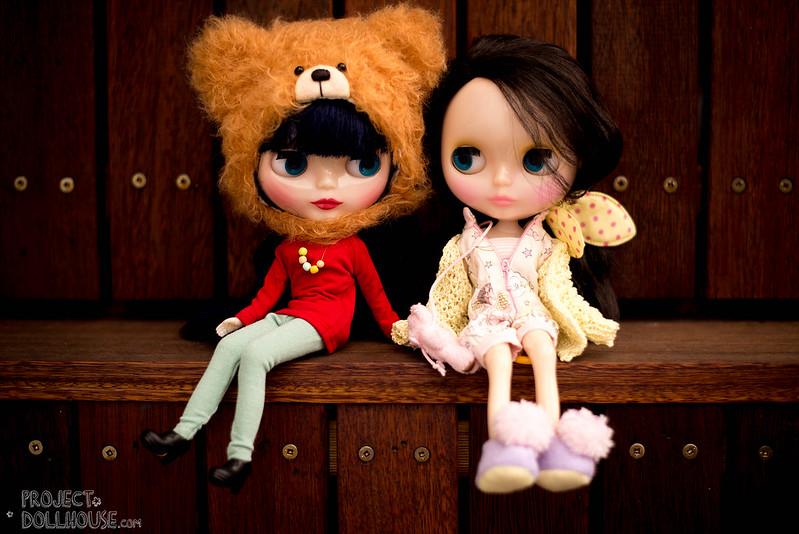 Here she is hanging out with Minji, my Curly Blue Babe. They are rocking it together.

I have one more translucent on the way, amazingly, I won the lottery for Dauphine Dream, the Anniversary girl for 2015. I’ve entered the lottery heaps of times over the last few months and it’s funny the only times I’ve won is for translucent girls!

I’ve been very very busy recently with a few commissions. I’ve even cranked out the airbrush! I’ll be updating soon with a new Pullip girl… and oh my goodness. Someone arrived in the mail today that has sent me swooning. More than usual. 1000x more than usual.