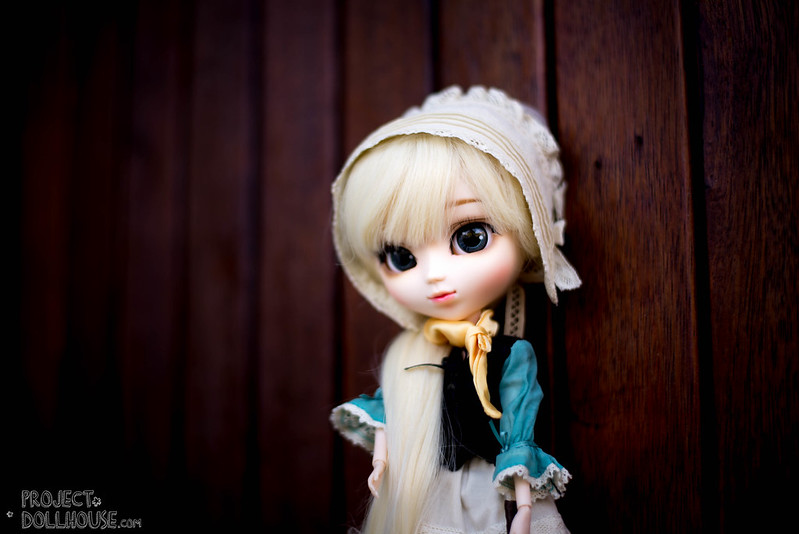 Pullip Starry Night Dahlia Cinderella was released in July 2013, and was released in a series of Cinderella (and fairy-tale) based girls. She came in both her princess transformed version and her pre-sadness maid version. Dahlia, which is how she will be called for now, is her pre-princess version.

Dahlia isn’t as popular as her Princess self, and has been sitting on shelves since 2013. After looking at some owner photos at the time, I decided that I would have to add her to my collection. I found her on special on Mandarake – it seems her popularity in Japan was also low! Poor girl! (but good for me!) 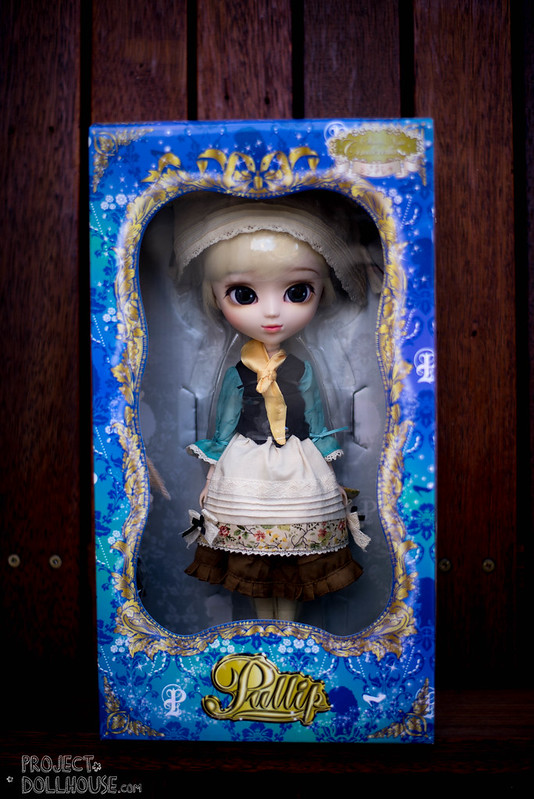 She comes in a blue box with cameo silhouettes printed all over. She has her famous glass slipper and flowers in print, where she peeks out under her platinum blond bangs. 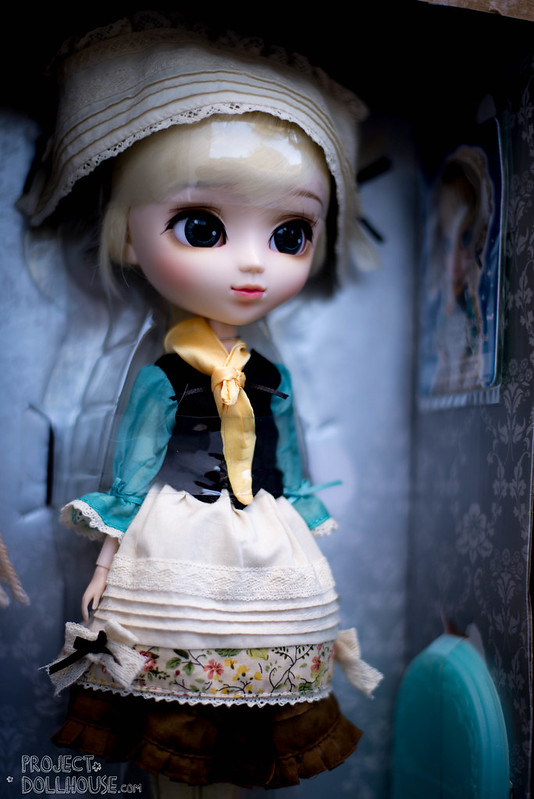 Though a maiden forced to work for room and board for her evil stepmother and stepsisters, she does come well presented. 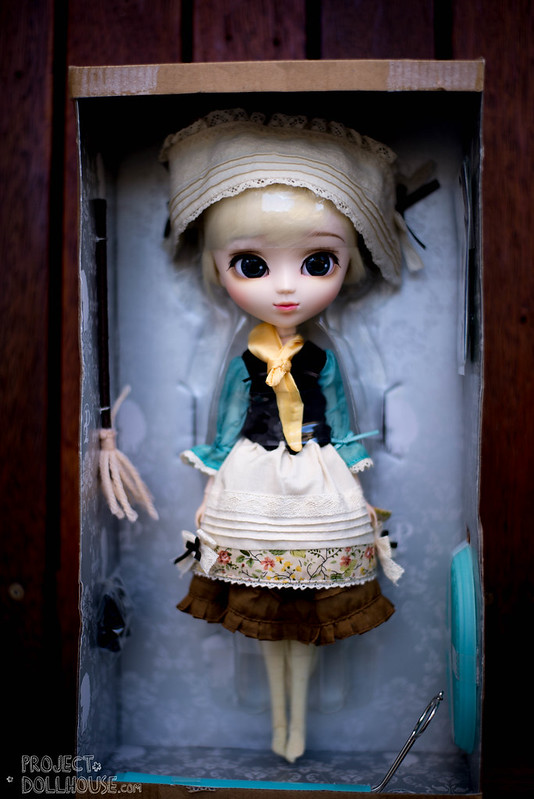 She also comes with her trusty broom because of course, she can’t even be given a break from cleaning even when in doll form 😉 Poor gal. 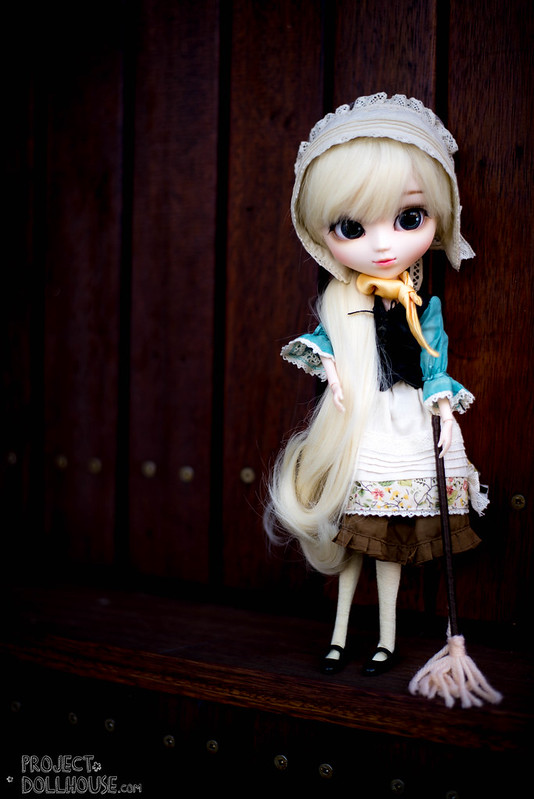 Here she is with her broom. She doesn’t seem like she minds cleaning too much.  Dahlia is a very pretty release, with long, platinum blond hair and a gorgeous, gorgeous faceup. 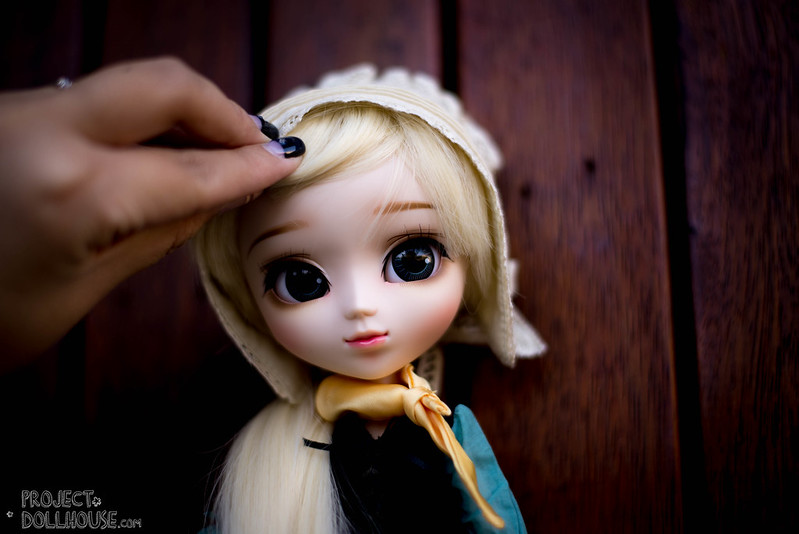 Her face-up reminds me of what BJD artists would do. Gorgeous, smokey eyes, detailed soft eyebrows that frame her face. Her eyeliner is in the “puppy liner” style with the wings pointed downwards. And she has a thick smattering of brown lashes underneath as well. Her eye makeup is white, brown and taupe with a smattering of rose. She has peachy perfect blush and a little smiling face that looks like she might be hiding a secret. 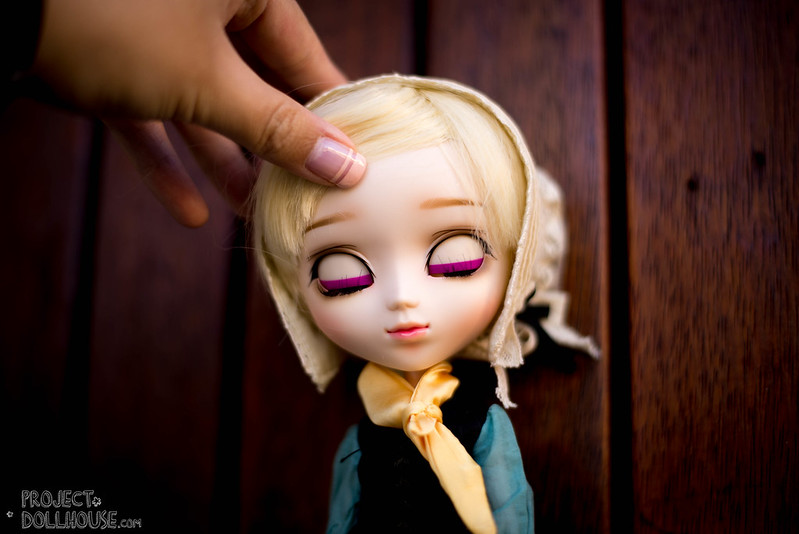 That secret so happens to be smoking hot pink eyeliner! So, in full defiance of her evil step-siblings and mother, she put a stripe of hot pinkish-mauve liner before she went about her chores. 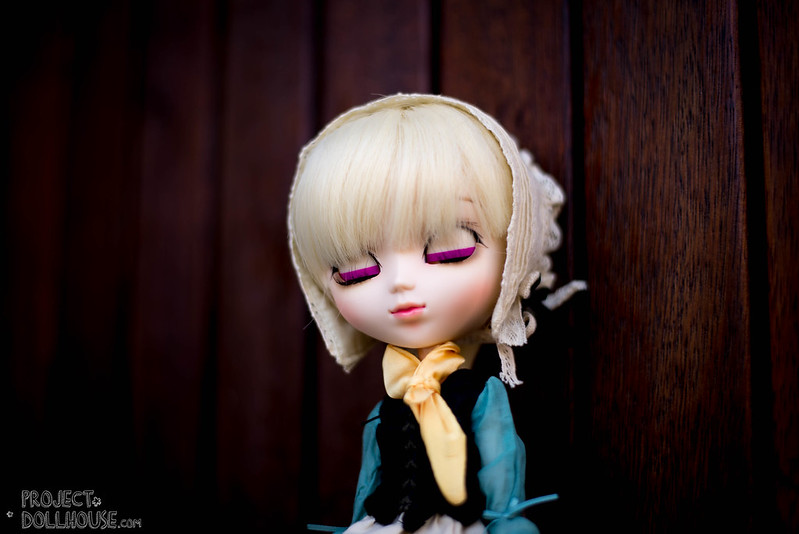 She has long bangs hiding her makeup (you can imagine her peeking out from underneath) also probably to hide her eyeliner when she sneezes from all the dust. 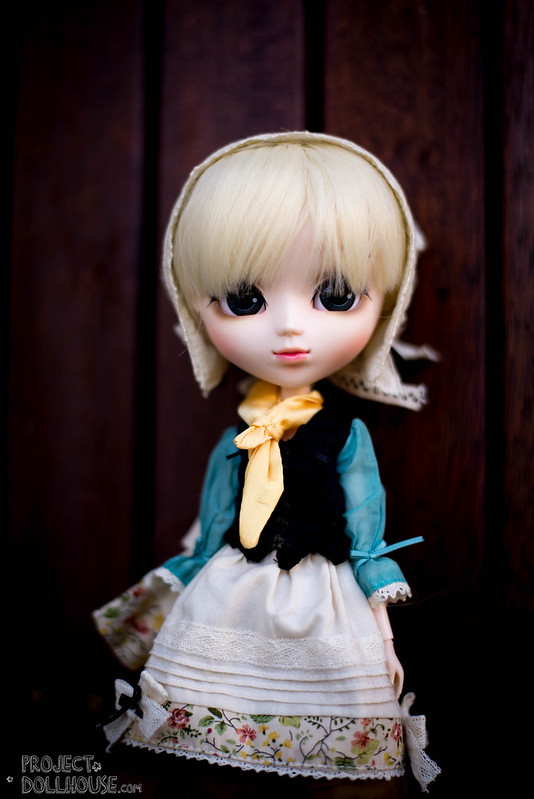 With her bangs down, she looks almost demure. She’s a gorgeous girl with a chiffon-thin blue top, detailed with bows and tiny lace. She wears a satin sunshine yellow kerchief around her neck, over a black vest. Her apron is wonderfully detailed on a flowery beige print, with laters of bows and lace and folds over the top. 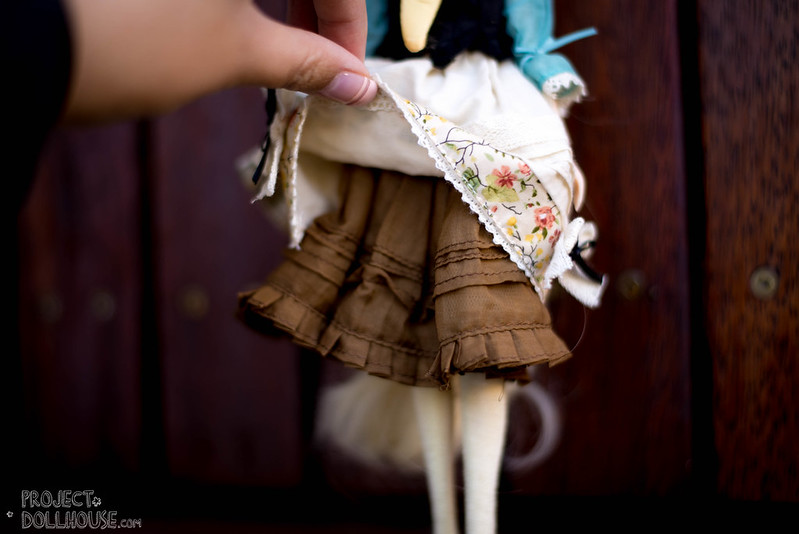 Underneath, you can see her brown skirt. Even though her family gave her such boring coloured fabric, you can see poor old Cinderella did try to make the most out of it, hiding some beautiful details. 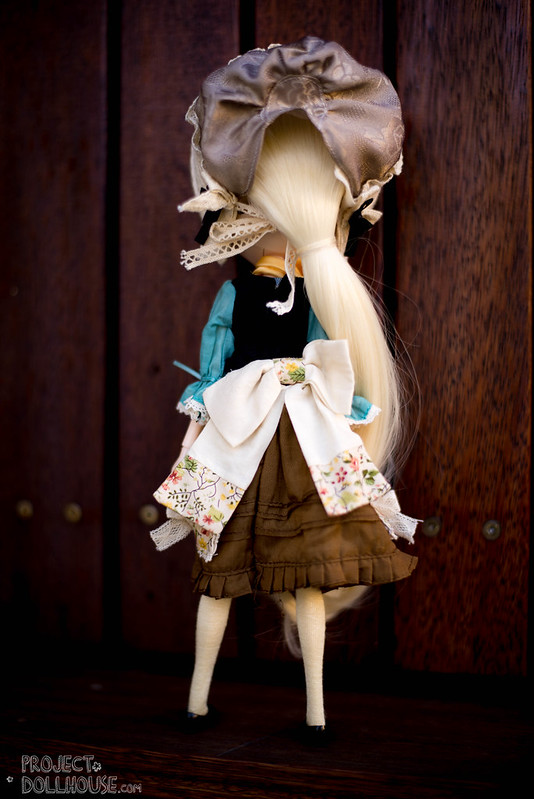 From the back, you can see the cute little flowery details around her giant bow, how the apron fans, and her gorgeous brown satin bonnet which is tied underneath her ponytail with creamy lace.

She has thick cream tights, which finishes off in black shoes – these are the exact same shoes on Classical Alice, slightly over-sized Mary Jane flats, giving her an overall child-like innocence. (I mean, her shoes don’t even fit! They seem too big for her!) 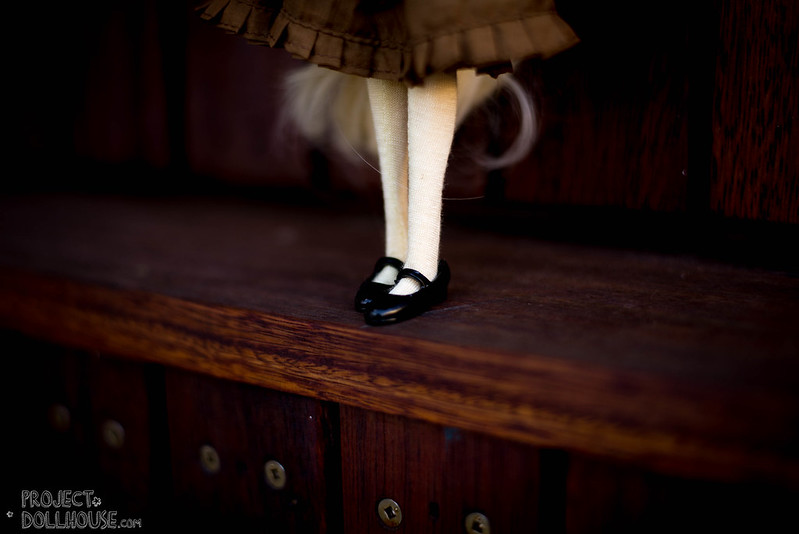 Together, I think she is probably one of the most pretty base pullips ever released. Her wig, a long, curled at the ends, platinum blond thing is of an okay quality. It’s not the softest, but it is one of the most manageable. 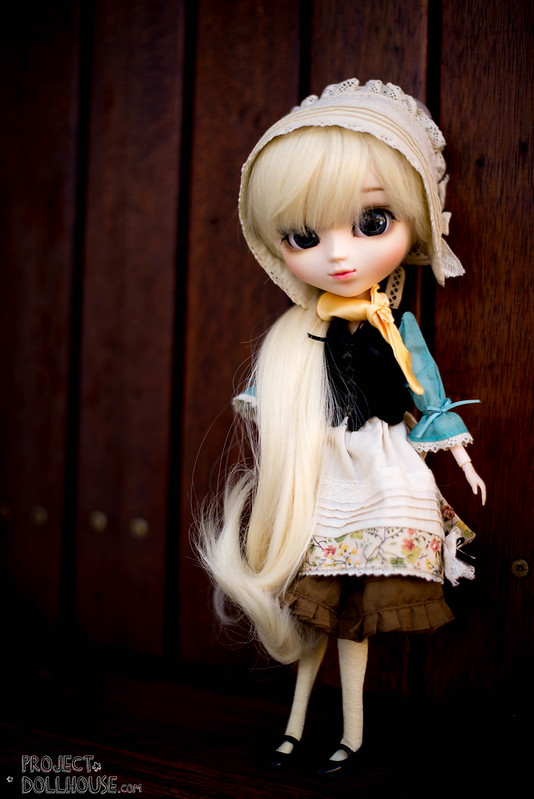 The whole package together makes for an excellent release. I have to say, I would recommend her as an introduction to Pullip. Her face-up is neutral enough so she would take well to re-chipping, re-wigging if you want. Her hair is long and you can play with it. her stock pieces are simple but you can dress her up and down. 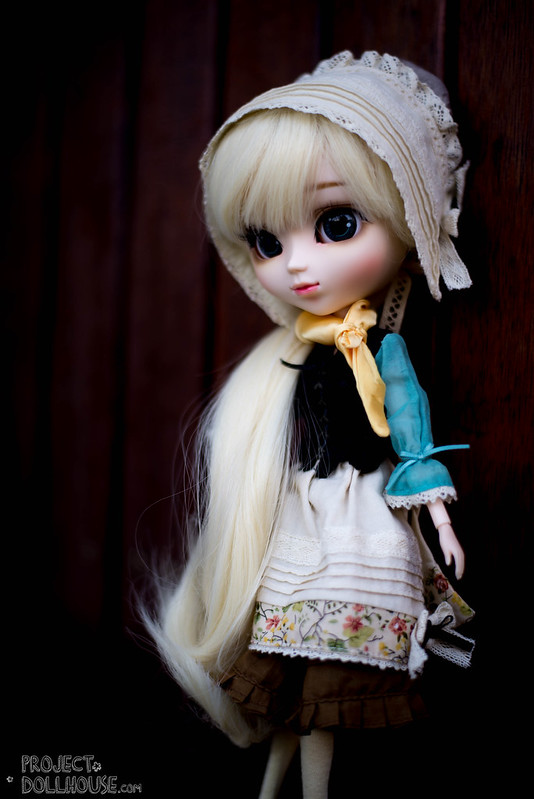 Honestly no wonder the prince fell in love with her! Look at her! This is meant to be her on a bad day!

As of writing, Dahlia Cinderella is still available via PullipStyle. 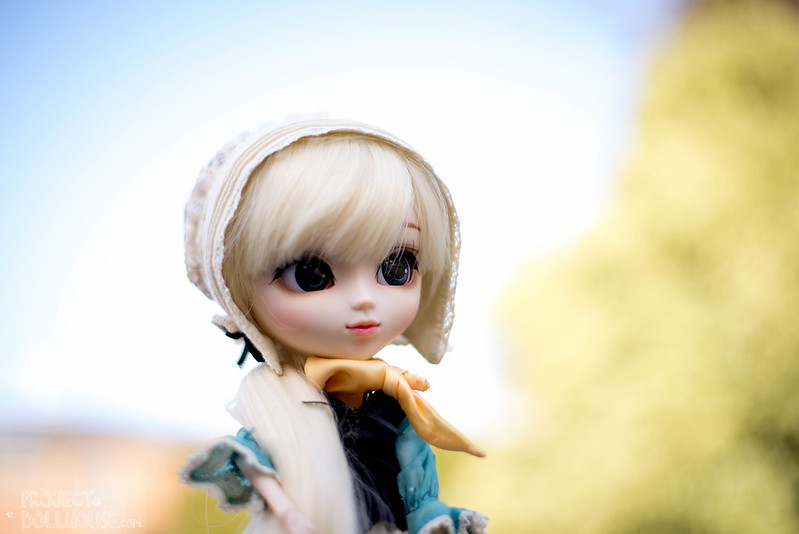