I’ve never quite fallen in love with a girl before she was even announced. Junko Wong posted a sneak peak of My Melody back in January, with her big fluffy ears and bright pink hair… and I was completely smitten. She’s an adventure to get this girl, but she’s full of snuggliness, and I understand that weird name “Softly Cuddly you and Me” – she looks like she could give you a good hug. I’d like to introduce you to the newest girl in my collection, and the one I’ve had to jump through the most hoops to get.

Pic heavy because I think I have a duty to share her – she’s a rare beast at the moment.

I found this post extremely hard to write and photograph because my brain just kept on going “YAYAYAYAYAYAY”. Working hard to get a doll is quite an adventure! 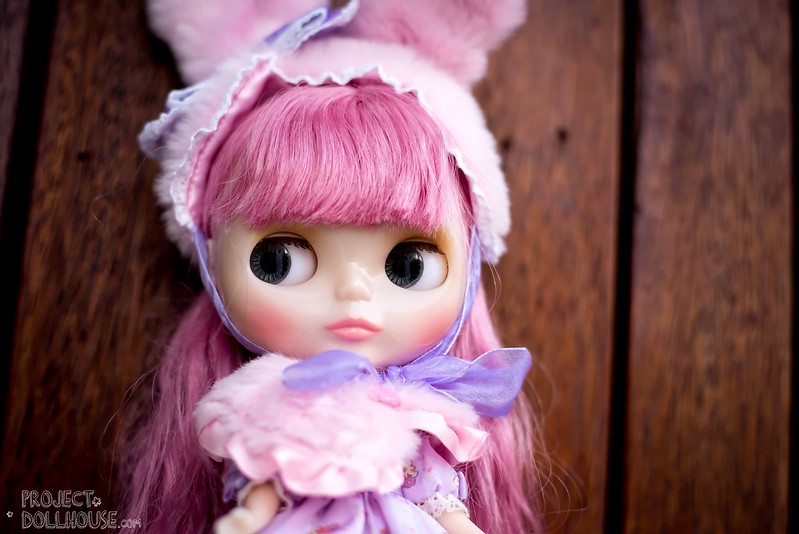 I was intensely updating the Blythe website come August when she should have been announced, and many fans like me who fell in love with her concept image where completely saddened by how hard she was becoming to get.

She had first emerged with a peachy complexion, and peachy ears, and a bright pink Penny-Precious coloured hair. I was smitten really – and so was a lot of other collectors I knew. My heart skipped a bit when Juniemoon announced that she would not be available at the international store not via lottery or anything, but only would be available through CWC affiliated stores in Japan. My Japanese contact said it was harder even then, with a lottery occurring within Japan to get her. People in Asia were luckier, with Hasbro stores holding her at exclusive stores, but still, she was a silent seller that disappeared quickly in a very centralised hype.

But I would not be stopped! All my years of collecting Japanese Stationary, games, exclusives, and all the training I had from that finally paid off. I sat on Yahoo Japan auctions, looking for a well-priced girl. At the beginning, after the initial pre-order or Japanese lottery she started popping up at ¥55,000-60,000 Yen. I waited, and waited before a reasonable price started to appear. Slowly she dropped to ¥44,000, then to ¥36,000. Her RRP was ¥26,500 sans tax so I did expect more, but not triple before she was even released!

Finally, a seller called Ellensia Blythe came through. It was almost 3 weeks after she was released before my agent in Japan received her.  I was worried during the time! The Japanese shipping is usually so efficient! But finally, after all this time, she arrived!

She came packed with all these goodies: Cards, pencil boards, a calendars, stickers!

Alright – down to business. 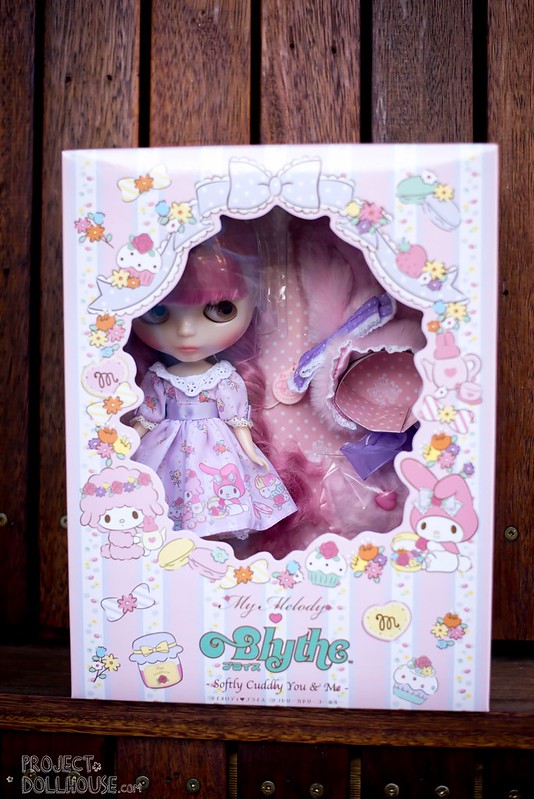 She arrived dipped in Sanrio, in a box covered in pale pastel pinks, and the My Melody theme colours. There’s cute illustrations of Macarons, the My Melody characters, cookies, cakes, flowers and jam-jars. 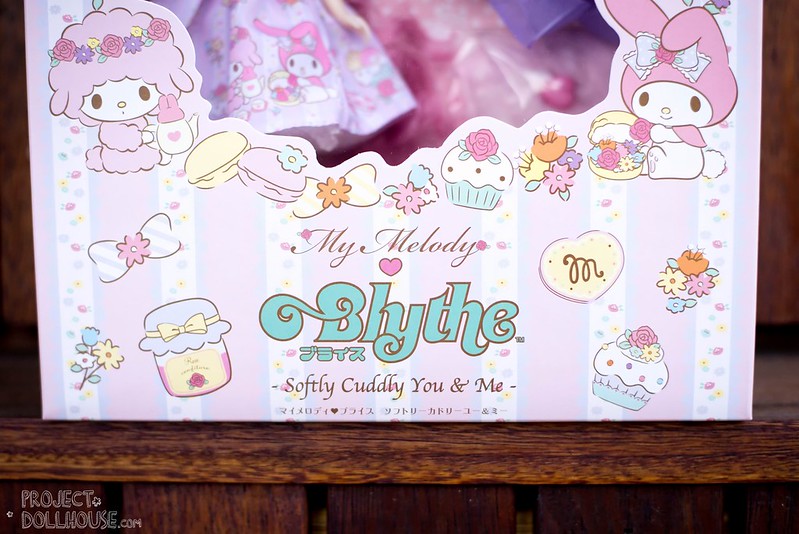 It’s quite an adorable box! 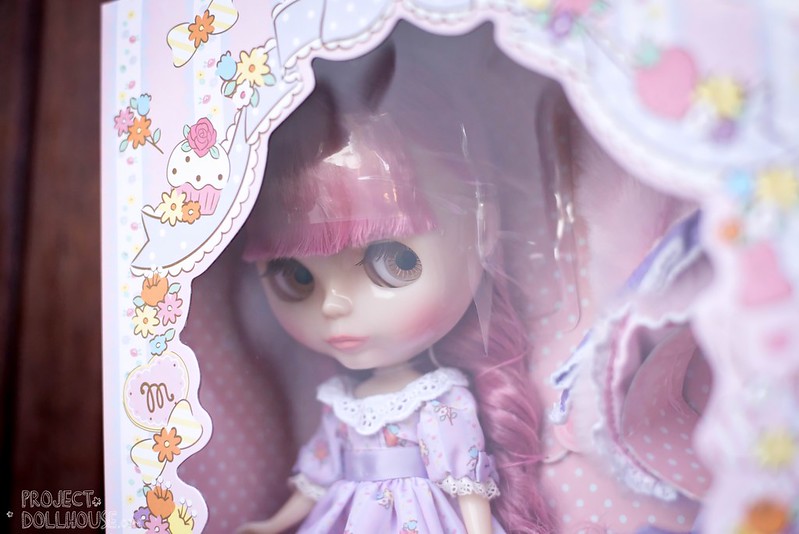 You can see her peering out of the box, and the whole thing is themed! She matches quite well. 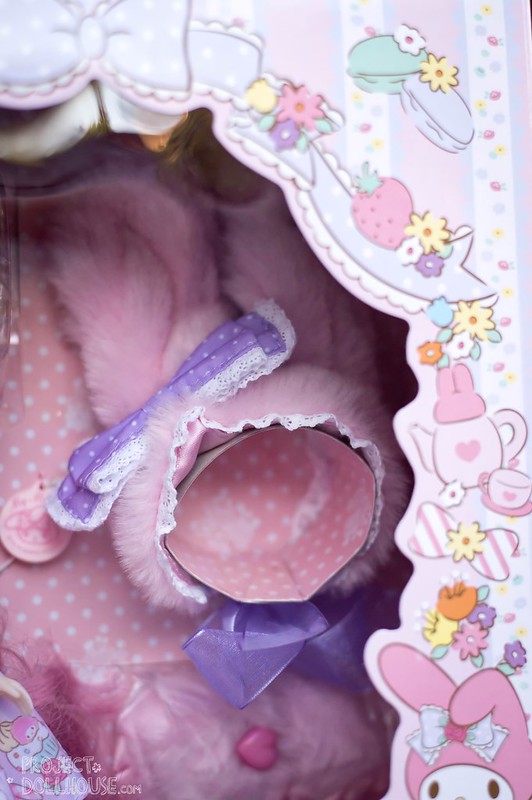 She has a fluffy pink hat in the box, with a little furry shawl and loveheart clasp. It’s all cool pinks, lilacs and purples. 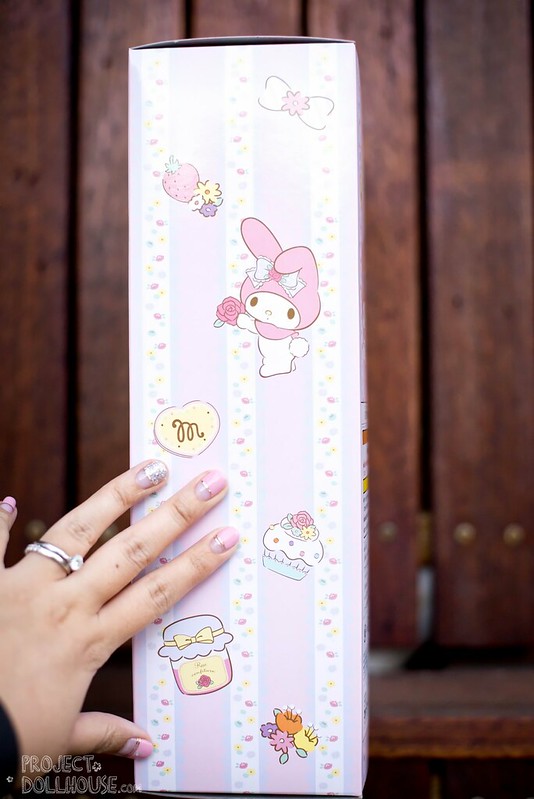 The side of the box features more of the same graphics, as does the back. 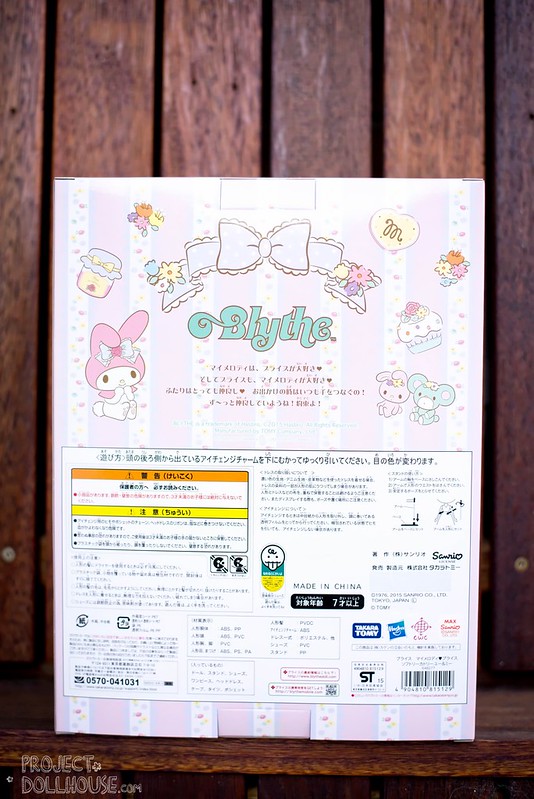 When you open her box, you are greeted with the little stand graphic in pink polka dots and flowers. 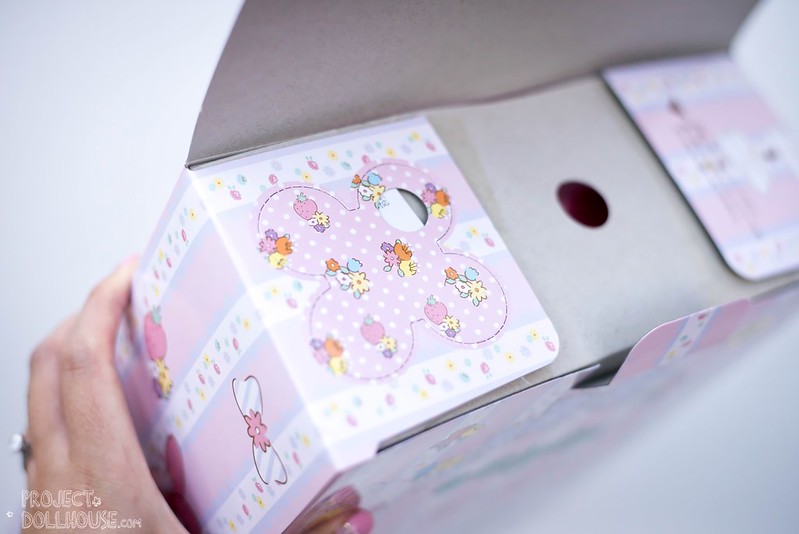 I’ve almost never used the stands so I’ll leave the box as is! I let out a little gasp as I slid her out of the box, she is a vision in pink dipped in rainbows and unicorns (More accurately fluffy bunnies!) 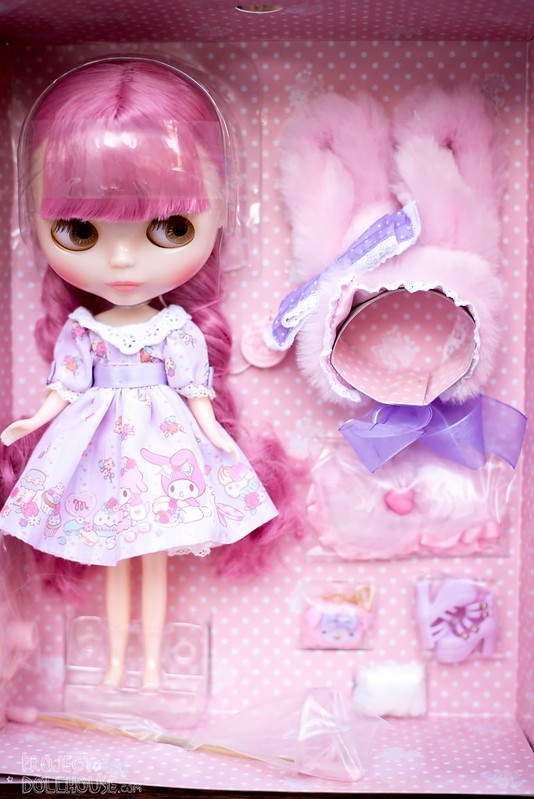 I don’t have any pink-haired girls but I was seriously quickly falling for her. In this picture you can see the components she comes with: the fluffy bunny hat, the furry shawl, the little My Melody handbag, the crazy lilac platforms, white lacey tights, and a pink and gold stand. Her dress is pale purple lilac printed with my Melody graphics and cakes, and trimmed with tea doily lace (non-technical term). 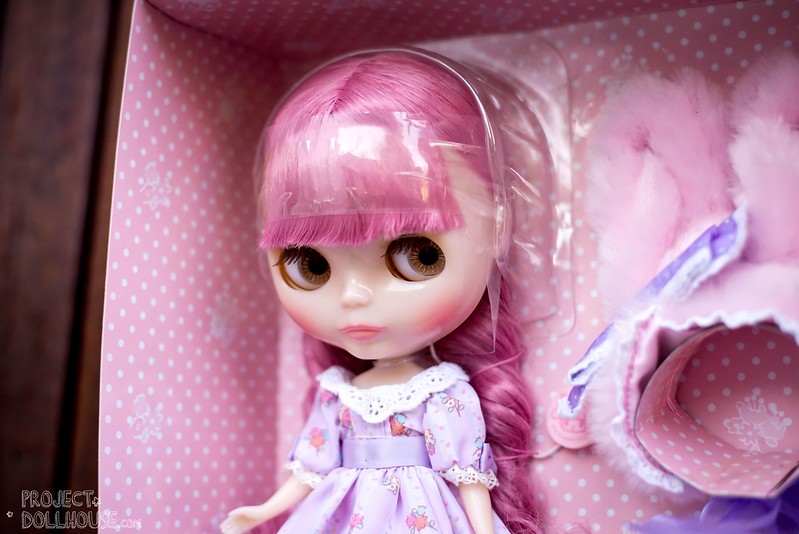 I have a few translucents, and she has this gorgeous creamy complexion that is closest to my Miss Sally Rice in colouring. Her lips are painted like NosPop in a very similar peachy colour. The eyeshadow also resembles NosPop’s. 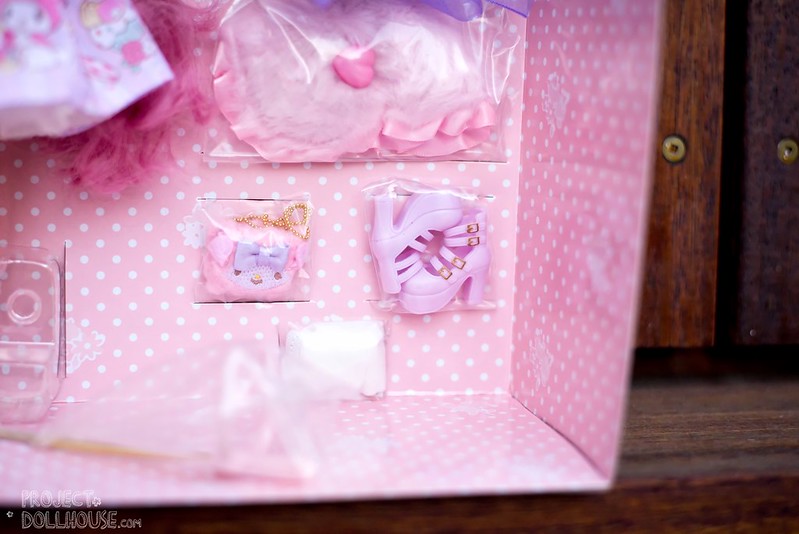 Further detail of her stock. How gorgeous is her polka-dot box? 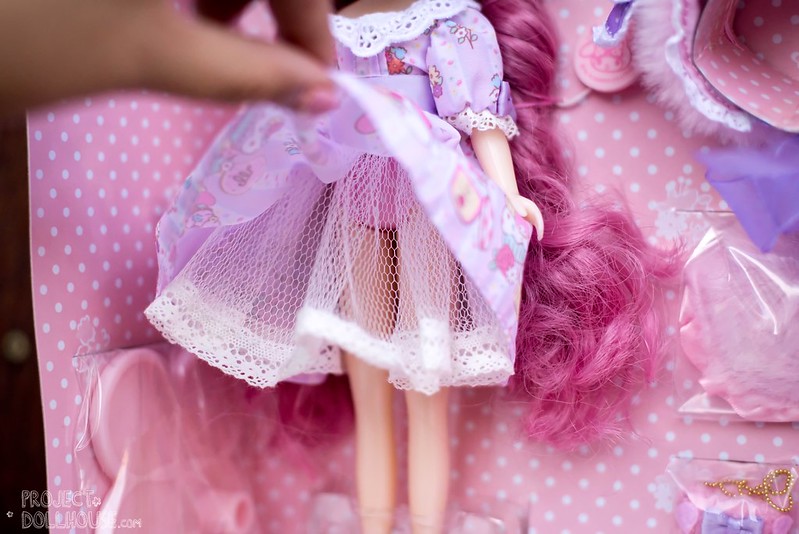 She has a meshy underskirt lined with lace, and also pink spotted underpants. 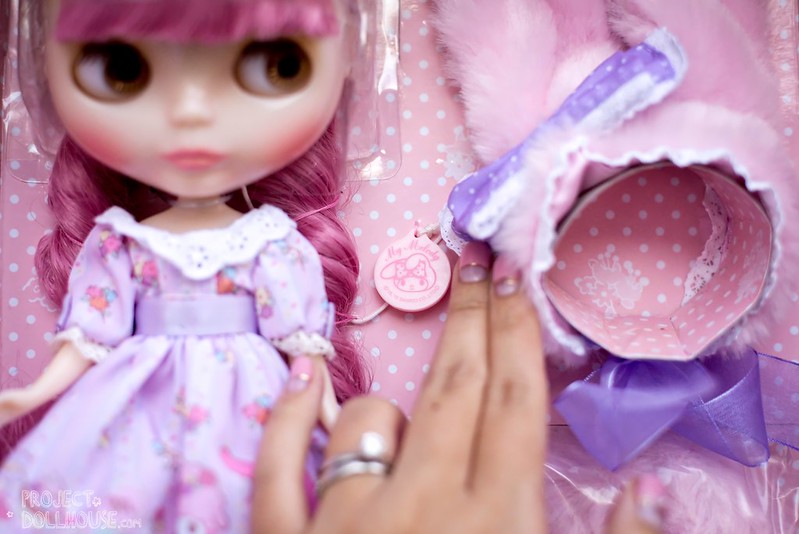 She also comes with an adorable My Melody pull tag. I have more photographs of this later! 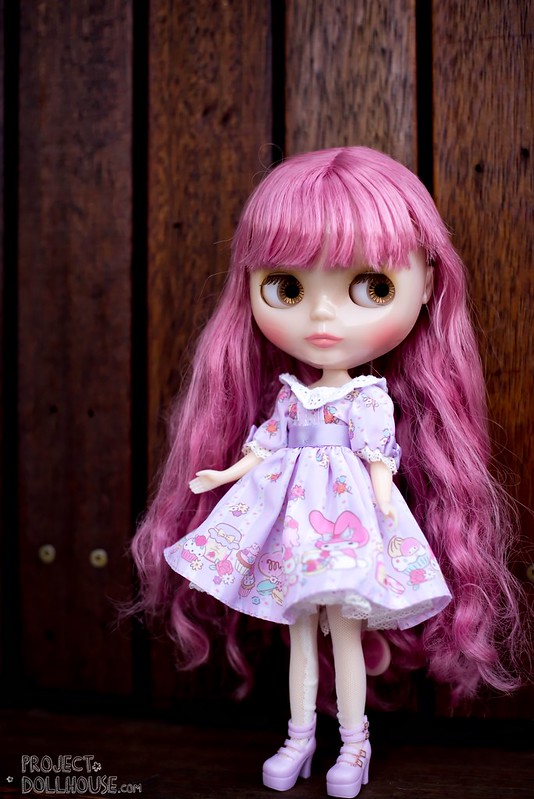 Here she is out of the box. She’s pretty cute right? I’m not a huge fan of her tights, or putting socks and tights on Blythes in general due to their bendy-sticky legs. The tights bunch up a bit, and my version of them were not completely sewn straight, resulting in some less cute seam lines. 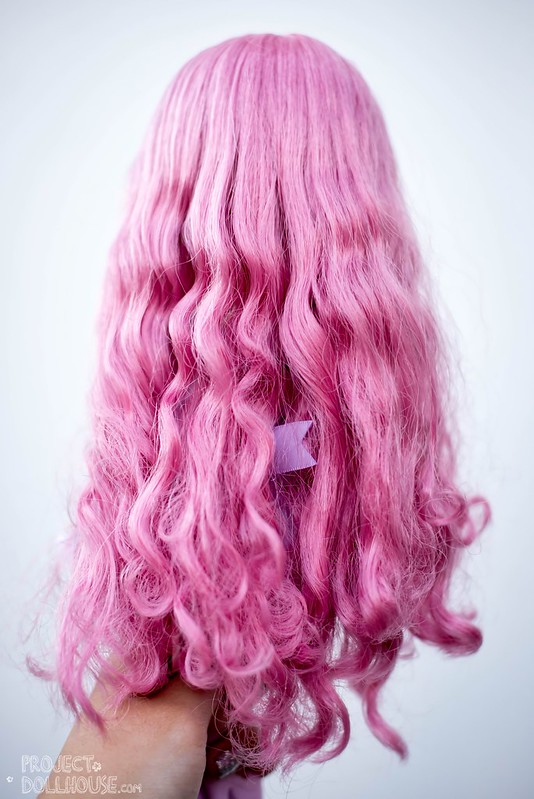 Her hair though! My goodness her hair out the box is horrendous. She had flyaways, frizzies, bits falling out (I actually pulled quite a few hairs out that were falling out of her scalp) and also her curls are a mess. Much sadness. She will be going to the Blythe Spa this weekend, that’s for sure! I’ll keep you guys updated on how the hair holds up. Her bangs, at least, are (mostly) straight. It’s a gorgeous colour though. A mauvey-pink. It’s got a purple base, and with the lilacs and pinks in her outfit, I think it matches wonderfully. I like it more than the brighter pink hair in her concept doll form. 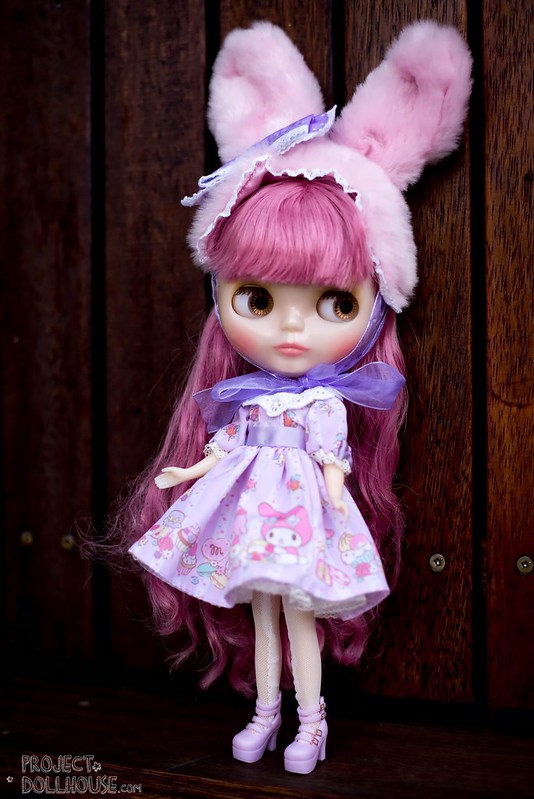 Here she is with her hat on… and my goodness. I LOVE her in her stock outfit. She’s just so sweet and looks like she’s the type to go and cuddle you, hence the name probably. It’s a horrendous name “Softy Cuddly You & Me”, but it probably makes sense here. You kind of lose your words and grammar as you look upon her sweetness. 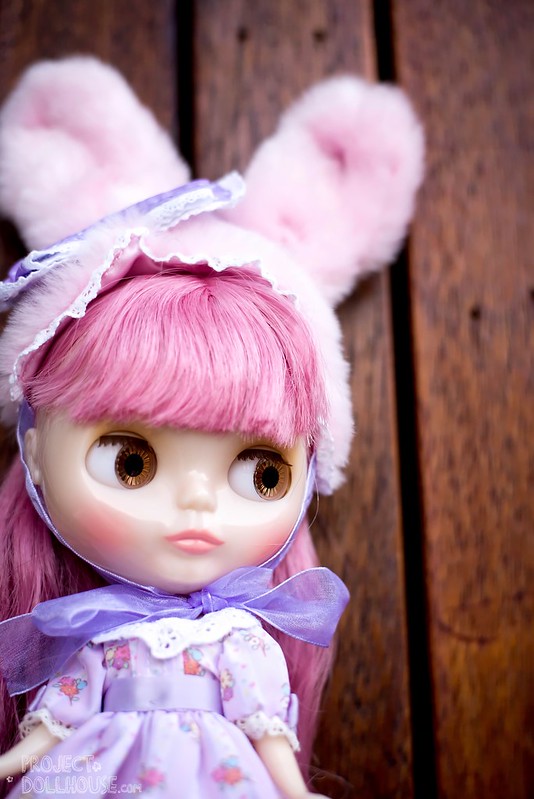 Here she is looking over in her special brown eyechips and yellow-sepia eyeshadow. I love her colouring! 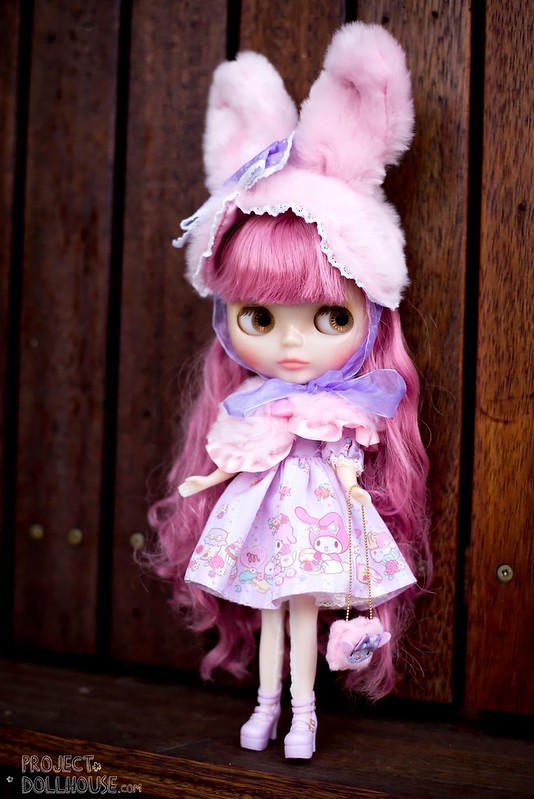 When she stands there clutching her handbag, I think she’s just to die for. That hair though. Every time I look at her I think she needs to visit the salon. Her pink furry shawl features a pink loveheart clasp which you slip an elastic over. I actually found this kind of annoying to do, or, it could have been I was doing it in a rush as I was quickly losing sunlight and reaaally wanted to take these photos of her.

Her furry hat is made of a lovely plush material and I just love the floppiness of them. It’s probably one of my favourite stock items ever. It’s quite well made as well. 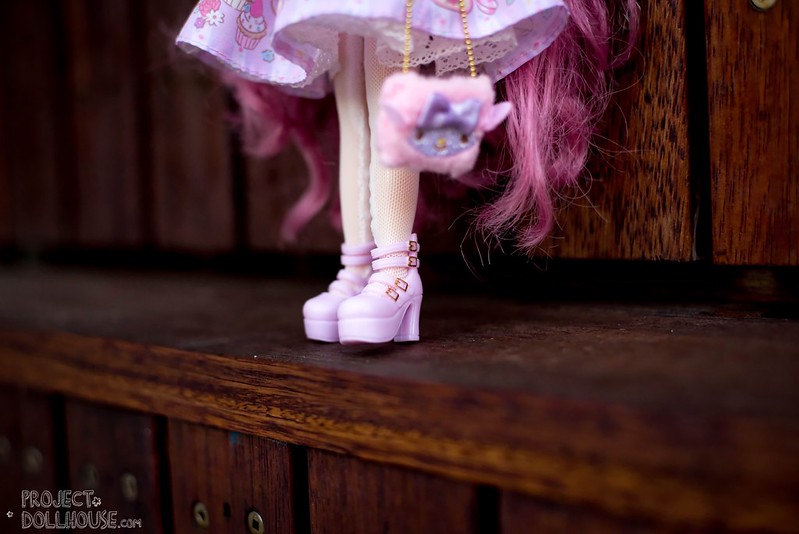 How crazy are her shoes! Platformed, heeled, many buckled. They remind me of Lolita shoes! They’re crazy for her sweet outfit but I love the spunk of them. 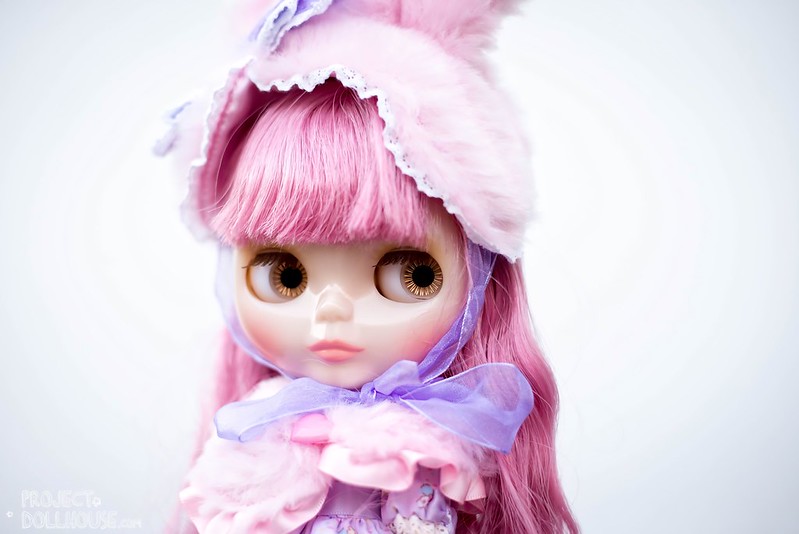 This girlie features four special eyechips! Her side facing (right) ones are this lovely pale brown. 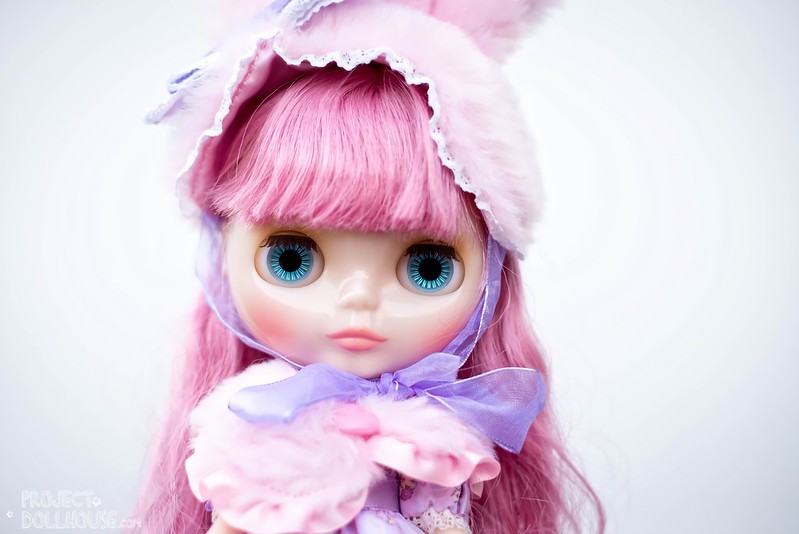 The fronts are a crystal clear blue, almost like a tropical ocean! It reminds me of Whitsunday beaches. 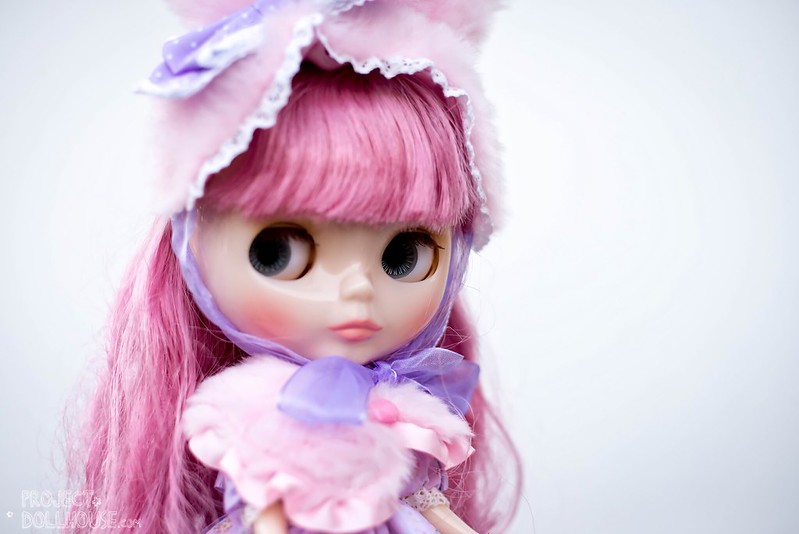 Her left facing ones are a gorgeous stormy grey. I think they look fab on her. 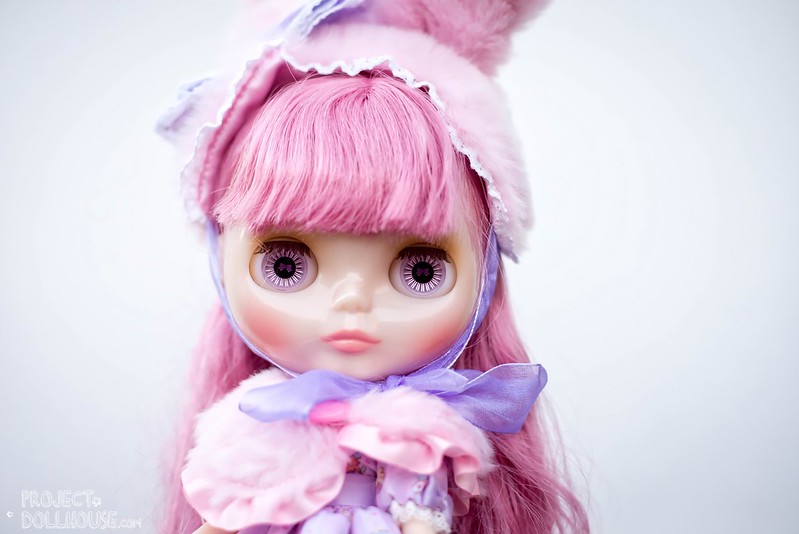 Her front facing ones are super special, with a pale-pink-lilac colour with little bows in the centre. Unlike most stock Blythes, I love every single one of her eye colours. They really thought through which ones would match her the most, and threw in an extra special one as well. 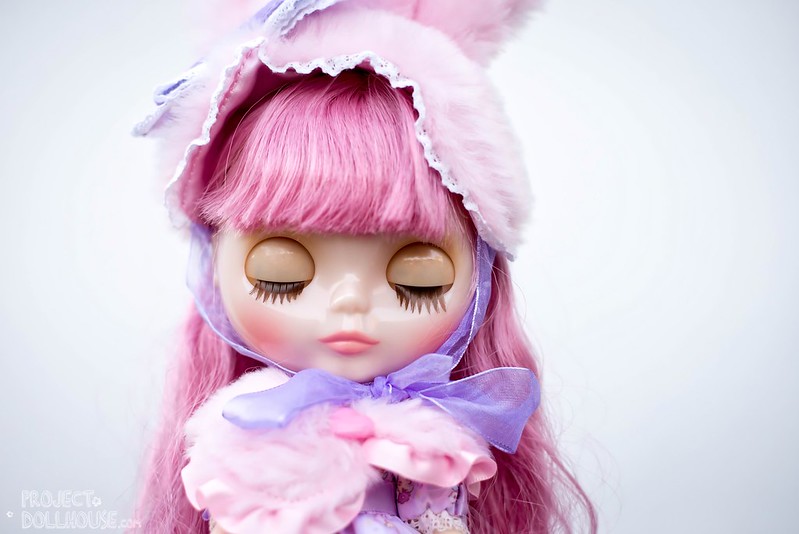 She also features slightly painted eyelids (in a pale brown) as well as lovely brown special lashes. These are the same ones on my Bianca Pearl! 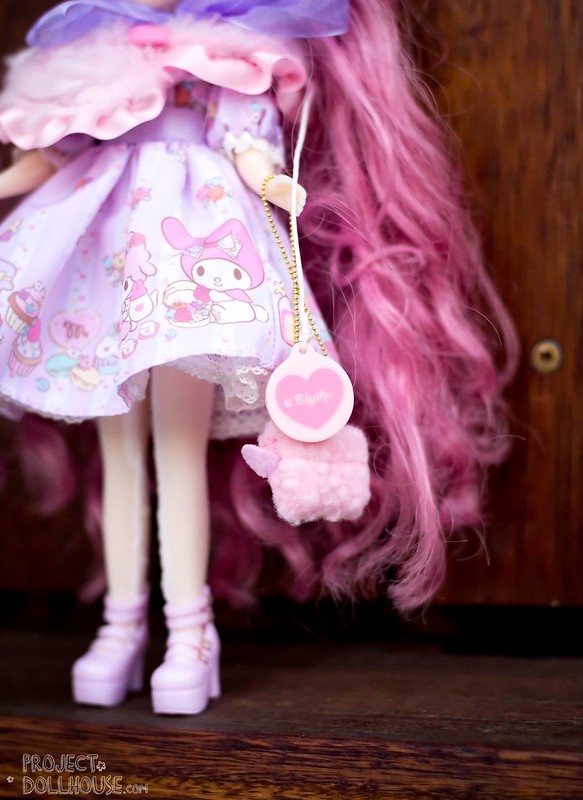 Here’s the close up of the back of her pull tag. It’s a loveheart with “Blythe” in it. 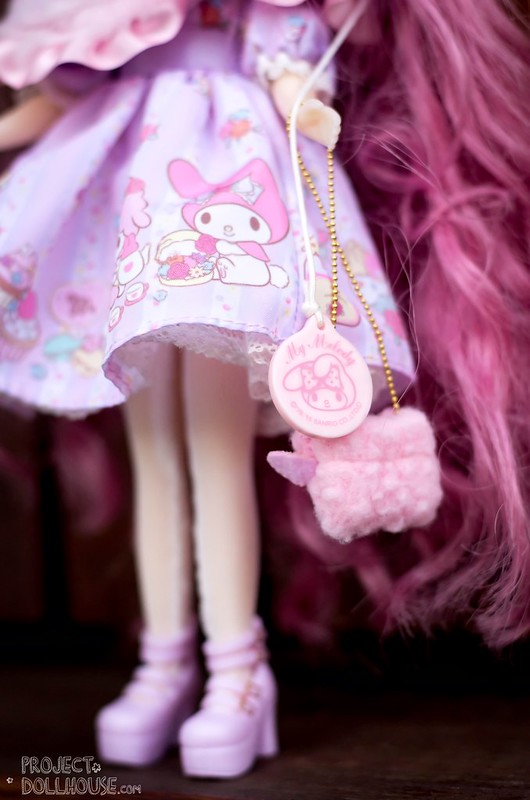 The front features that cute illustration of My Melody. The tag is made of a hard plastic that is matte to the touch. 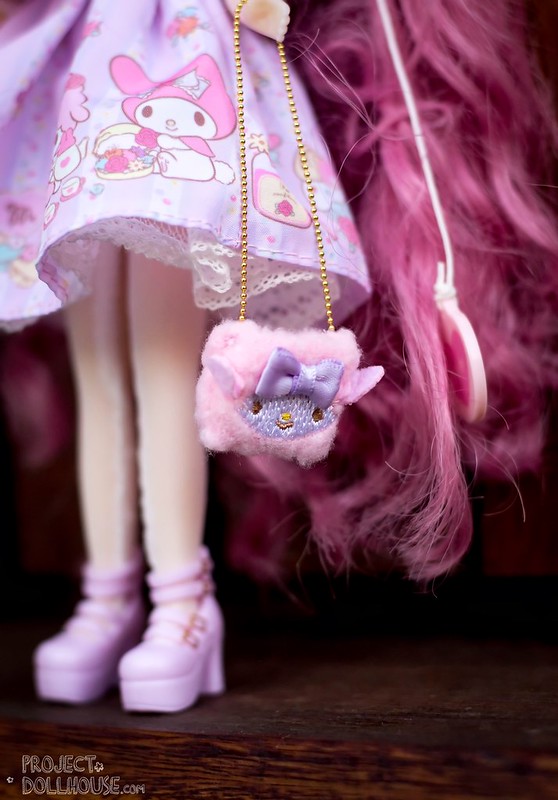 And a close up of her handbag. It’s a furry pink on a golden ball chain. The fur has a My melody embroidered in lilac with a lilac bow and flappy little ears.

She’s been an adventure to track down, but the chase is part of the fun in this hobby. What a gorgeous girl. I do love her lots, and I probably will keep her completely stock. Hopefully when I finish her hairstyle this weekend she’ll have lovely curls. A few people have posted success stories on their Facebook with her hair! 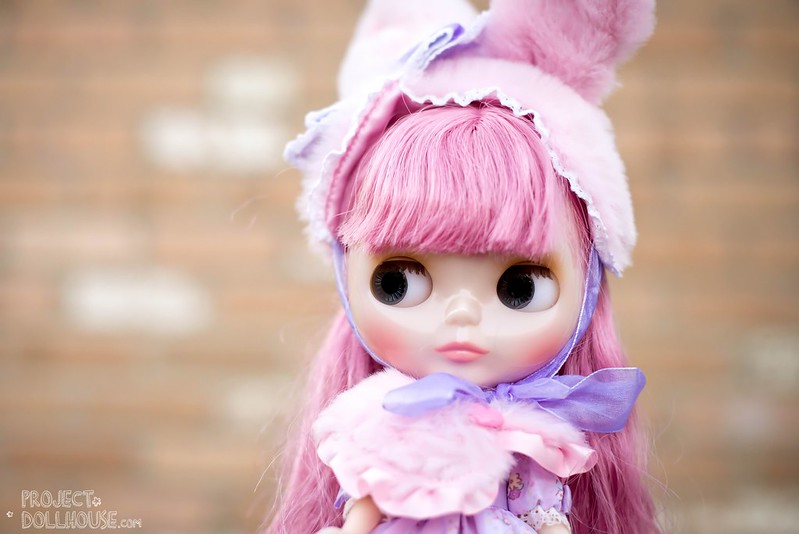 She’s still hard to get, and is still popping up on Yahoo Japan auctions. I’ve seen a few on Dolly Adoption, currently going for $500 (yikes!). I’m not sure how her price will hold in the future. She’s currently more expensive than Miss Sally Rice, and she’s only been out for one and a half months! 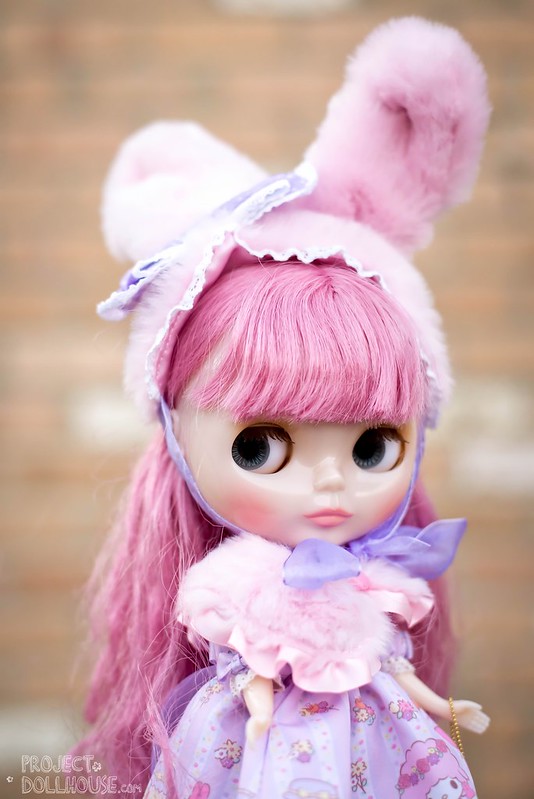 But if you can find her… and you love cuddly bears and sweetness. My goodness, yes, pick her up. She’s gorgeous.