My first introduction to dolls really was when my brother bought be a Hatsune Miku Pullip. I found out later that Blythe had a version too… and she was translucent! She became a wishlist doll, but she slowly moved her way down, and sometimes out of the list. However, on a recent trip to Shanghai, I found her in one of the official Blythe stores… for an amazing price. Let’s meet Miku!

Let’s start with why Miku suddenly made it back on my wishlist. I’ve spoken before of my love of Ken’s K07 Dolls… and when I saw the Miku version, my heart just stopped. Amazing right? So she came back on my list for the express purpose of being sent to Ken.

I went to the shop in Shanghai with one of my best friends. He’s scared of dolls, but he speaks Shanghai-nese. I was umming and ahhing over the cabinet, and he comes over and says “Are you serious about this, because if you are, you need to shut up” and he proceeded over to the lady to haggle with her while I had a deer-in-headlights look on my face. At the end, he smirked, and told me to hand over the $200.00. $200! USD! Unbelievable! I was over the moon getting her for such a good price. 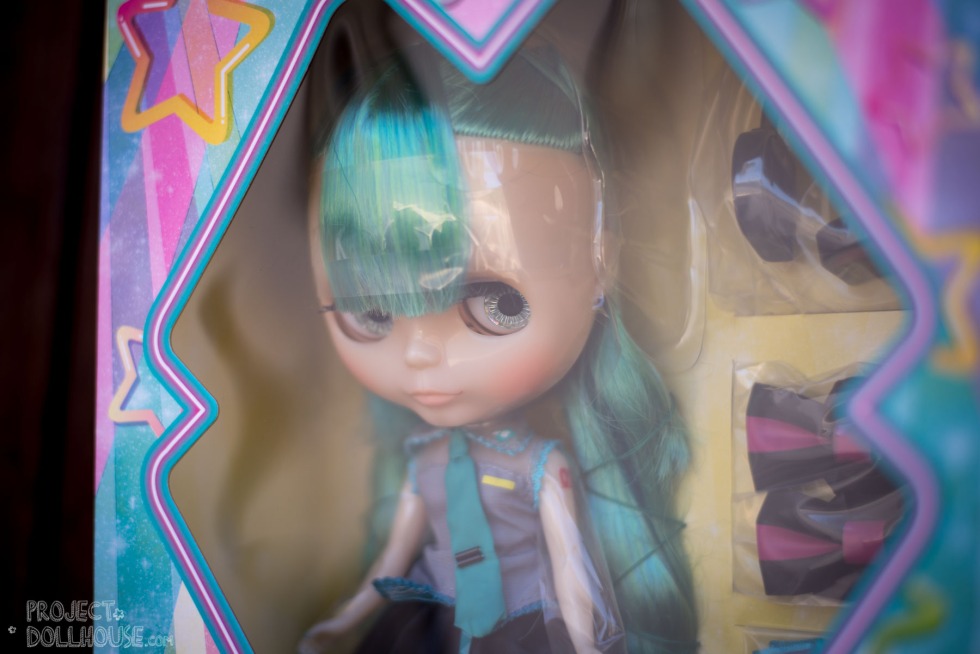 Miku comes in a very large Blythe box. Her box is psychedelically coloured with bright poppy colours and stars, very fitting of the electric-idol.

The bottom of the box tells us this is a Blythe x Hatsune Miku collaboration. As such, when she was released she was a limited edition, and had a higher RRP.

She comes with a lot of extras. She’s dressed like Miku, down to the little tattoo on her arm. She has glorious-hime-cut hair with streaks of turquoise, blue and green. She comes with two giant hair ribbons, and headphones. 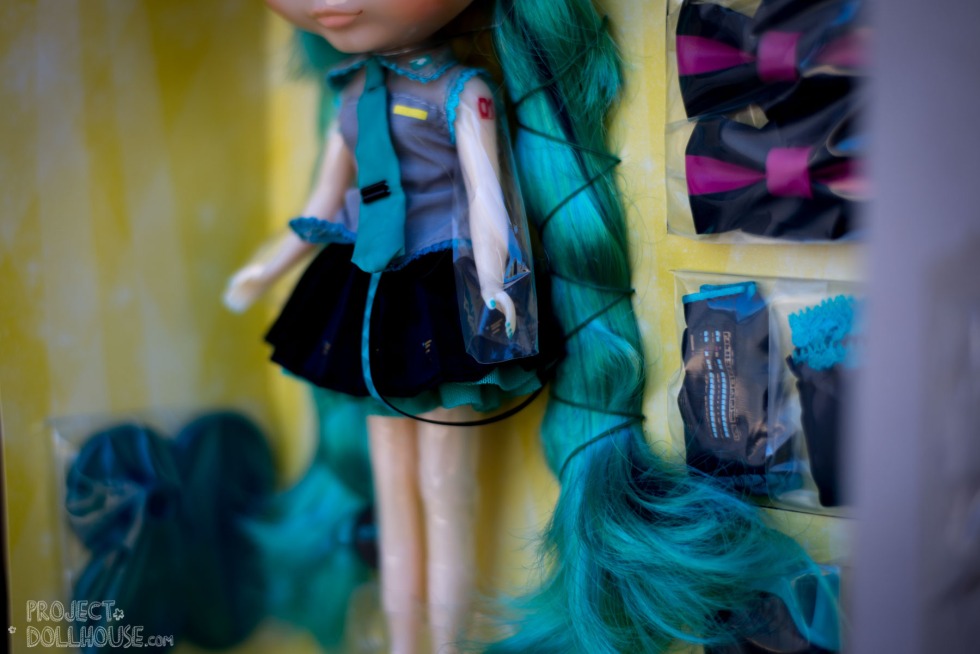 She also comes with arm warmers, and she features a turquoise manicure. I tried my best not to move too much out of the box, as I had to send the whole thing to Ken. 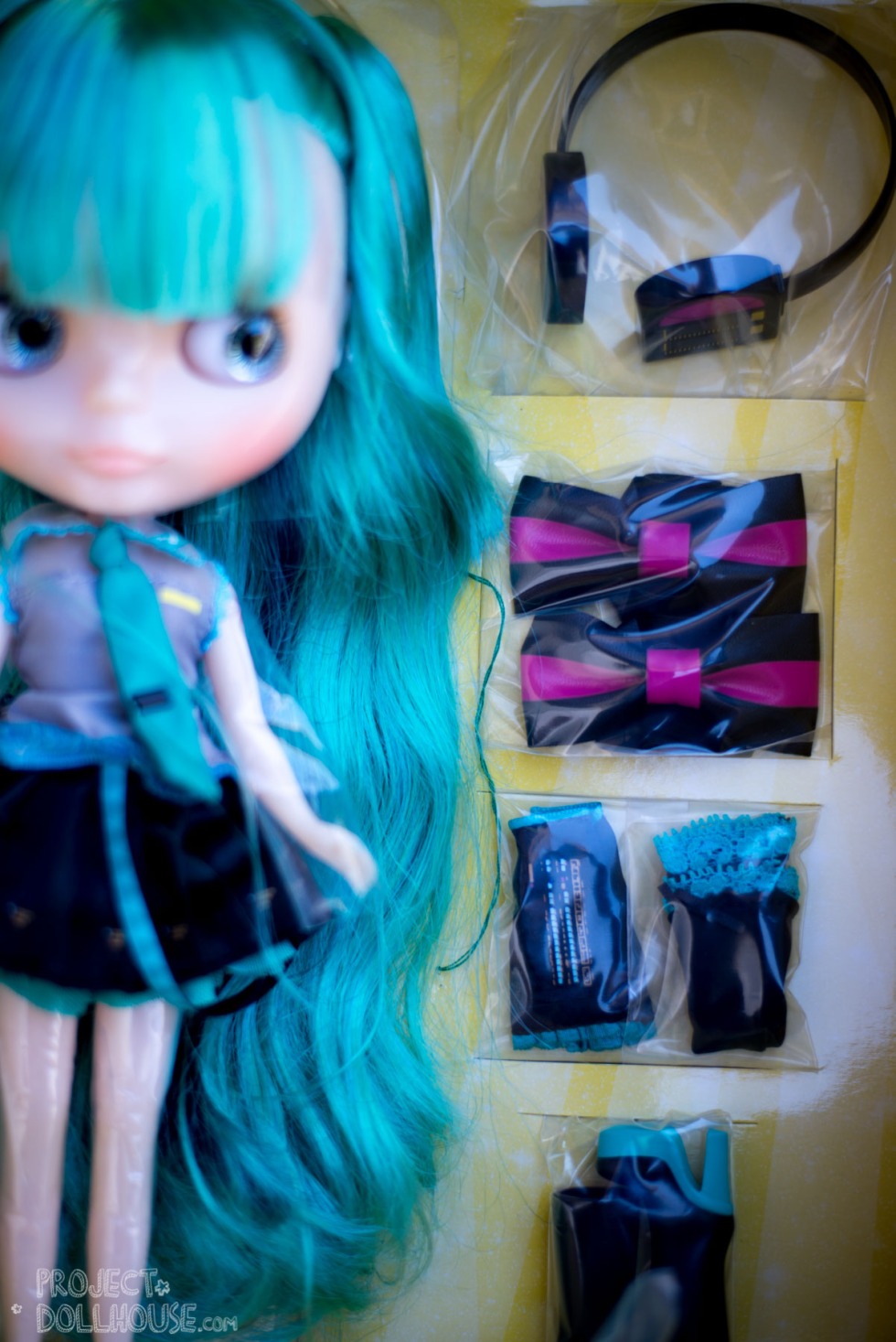 Check out her awesome boots! They do not look comfy to walk in.

Here she is out of her box! She has four special eyechip colours, a gorgeous light turquoise, a darker, a shimmering holographic pair and a light blue pair.

She also has a very special pull string with a black tag printed with “Blythe” on it.

After I took some quick snaps I quickly boxed her back up and she’s now sitting on my desk. I didn’t want to get too attached to her stock self as I wanted to send her away… but I can’t for the life of me decide if I want to send Miku or the new Cherie Babette – I definitely want to send a translucent to Ken, and then I got more confused when he post a picture of his newest NosPop… 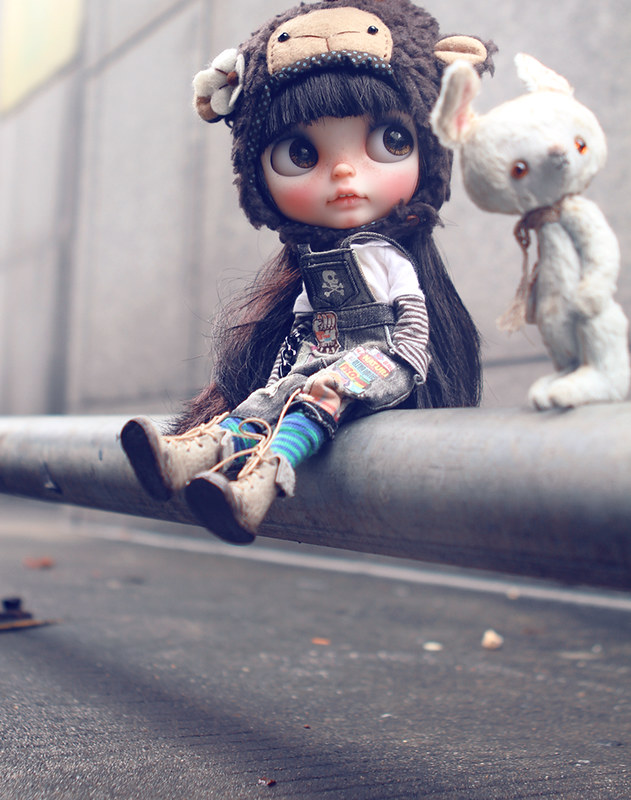 Just killing me Ken. What do I do! I’ve been indecisive for a whole MONTH.